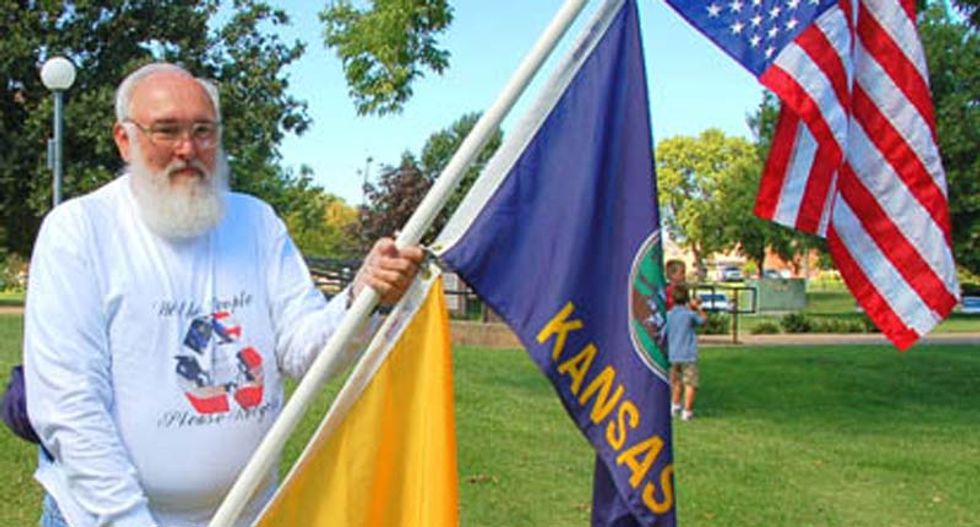 A Saline, Kansan man who attempted to arrest President Barack Obama in 2011, sat down for an interview with the Wichita Eagle to explain why he posted a Facebook threat to "strike" a local mosque -- clarifying what he meant by admitting he'd show up and cheer if someone burned it down.

In 2011, J. Neil Jednoralski contacted Kansas Secretary of State Kris Kobach, the Kansas Highway Patrol and the Saline County Sheriff’s Office asking for assistance in arresting the president for illegally holding office as a foreign citizen.

Jednoralski subsequently had his guns and handcuffs temporarily confiscated by the Secret Service after he showed up during a presidential appearance at the University of  Kansas.

Since that time, the 69-year-old retired engineer has been keeping an eye on mosques throughout the state, and recently wrote on Facebook, "WE (sic) need to keep an eye on muslim owned buildings. and ready to strike."

Speaking with the Eagle after his comments drew the attention within the domestic terrorism community, he claimed he only meant to go after mosques storing  ammunition or explosives that could be used in a terrorist attack.

Asked why he has singled out Muslims, Jednoralski stated that their religion is illegal in the U.S.

“I think they’re a dangerous cult. They’re not a religion," he explained. "I think the Muslim religion is against the law in the U.S. I took an oath when I served in the military to defend the Constitution against all enemies, foreign and domestic and I feel that oath is forever.”

Pressed about a series of fires set at mosques around the U.S. and abroad, he said he wouldn't be opposed to setting them on fire before adding, "I would have been like the people in Europe that cheered.”

As far as how he keeps tabs on the twenty Muslim facilities in Kansas, Jednoralski said he and other local anti-Muslim activists keep an eye on them, looking for suspicious activities and reporting back to the local authorities.