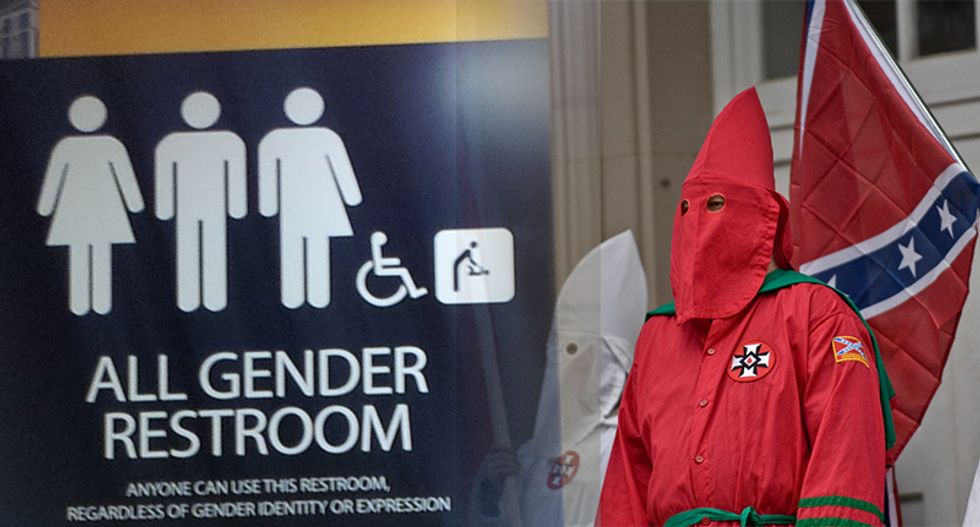 Photo via Wikimedia commons and Arete13/Flickr

Activists hoping to keep transgender people out of bathrooms just got a new ally: the Ku Klux Klan.

An Alabama neighborhood received fliers speaking out in support of laws like the one passed in North Carolina, that confine bathrooms to gender assignment at birth. They also begged for new recruits and solicit donations.

“It appears to be against transgender and transgender bathrooms and it was basically a recruitment flier,” Capt. Will Benny explained to the Dothan Eagle.

“What you’re dealing with is potentially implications of a hate crime or promoting a hate crime, so we notified the FBI,” reported Dothan Police Chief Steve Parrish.

Benny clarified there is no crime committed simply by distributing fliers, but he still forwarded it to the FBI for intelligence information.

“Obviously, any time you get hate-related material there’s a reason to be cautious and to investigate it,” Capt. Stacy Robinson said, emphasizing that the flier was also forwarded to the FBI as a precautionary measure.

The flier calls transgender people an “abomination” in accordance with the King James Bible, which never specifically refers to transgender people or gender identity. It also quotes Deuteronomy 22:5, “A woman shall not wear that pertaineth unto a man, neither shall a man put on a woman’s garment. For all that do are an abomination unto the Lord thy God.”

Appearing as though the Klan is coming out against women wearing pants, as well, the flier suggests trans people are endangering the safety of women and children by using the bathroom

A phone number is listed on it, as well as website, where allies to the KKK's anti-transgender cause can make donations to the hate group.

It was signed by "The Loyal White Knights of the KKK."

This is the second flier Alabama residents have received this month from the KKK. May 16, midtown Mobile got blanketed with KKK fliers. The same happened in Mississippi, just two days later.

Right-wing, transphobic Christians are flocking to Target stores to protest a new policy that allows people to use whatever bathroom that matches their gender identity.