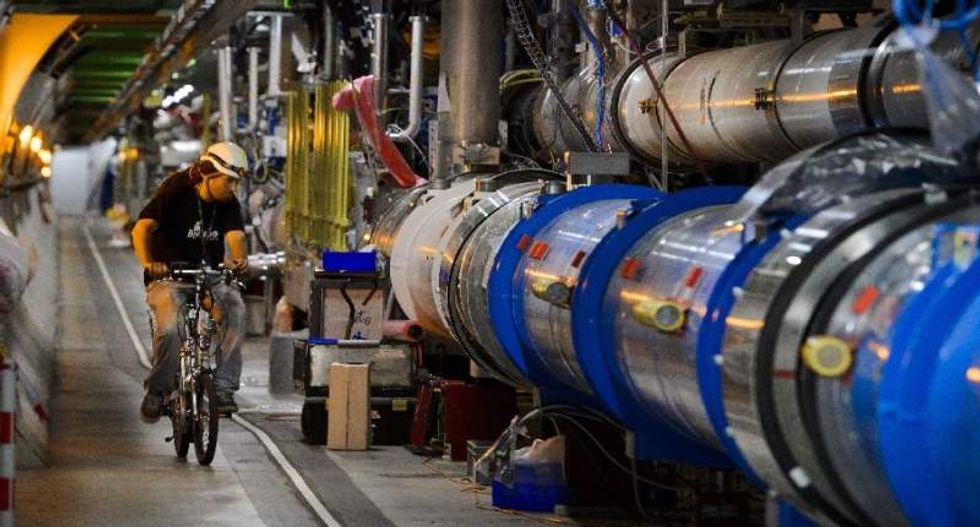 A worker rides his bicycle in a tunnel of the European Organisation for Nuclear Research (CERN) Large Hadron Collider during maintenance works in Meyrin, Switzerland on July 19, 2013 (AFP/Fabrice Coffrini)

The world's most powerful proton smasher is preparing for its biggest run yet which scientists hope will uncover new particles that could dramatically change our understanding of the Universe.

"We are exploring truly fundamental issues, and that's why this run is so exciting," physicist Paris Sphicas told AFP at Europe's physics lab, CERN, last week.

"Who knows what we will find," he added, with CERN saying preliminary results from the run could be available in the next few months.

Scientists had been gearing up to resume experiments at the LHC this week, but the plans were delayed after a weasel wandered onto a high-voltage electrical transformer last Friday, causing a short-circuit.

CERN told AFP that experiments were now expected to get underway next week.

Late last year, before CERN shut down its Large Hadron Collider (LHC) for a technical break, two separate teams of scientists said they had discovered anomalies that could possibly hint at the existence of a mysterious new particle.

The discovery of a new particle could prove the existence of extra space-time dimensions, or explain the enigma of dark matter, scientists say.

The LHC, housed in a 27-kilometre (17-mile) tunnel straddling the French-Swiss border, has shaken up physics before.

In 2012 it was used to prove the existence of the Higgs Boson -- the long-sought maker of mass -- by crashing high-energy proton beams at velocities near the speed of light.

A year later, two of the scientists who had in 1964 theorised the existence of the Higgs, also known as the God particle, earned the Nobel physics prize for the discovery.

The Higgs fits in with the so-called Standard Model -- the mainstream theory of all the fundamental particles that make up matter and the forces that govern them.

But the anomalies, or "bumps", seen in the data last December could indicate something completely new.

Going beyond the Standard Model would "mean that there is yet another unbelievable idea out there. Something that is totally unthinkable," Sphicas said.

The LHC, he said, could unveil whole new dimensions, help explain dark matter and dark energy, of which we have no understanding but which together make up 95 percent of the universe.

The giant lab might also prove the exotic theory of supersymmetry, SUSY for short, which suggests the existence of a heavier "sibling" for every particle in the universe.

The unexpected excess pair of photons spotted last year could be a larger cousin of the Higgs, according to one theory.

"Who knows, maybe there's a whole Higgs family out there," Sphicas said.

But to determine whether the observed data "bump" is merely a statistical fluctuation or could actually be the first cracks in the Standard Model, much more data is needed.

When the massive machine comes back online, it is expected to quickly pile up astounding amounts of data for scientists to pick through for clues.

After the Higgs discovery, the LHC underwent a two-year upgrade, reopening last year with double energy levels which will vastly expand the potential for groundbreaking discoveries.

The LHC ran for six months last year at the new energy level of 13 teraelectronvolts (TeV), but since the machine was just getting started again, it was not pushed to create the maximum number of collisions.

Once it gets started again, the machine at its peak should see two beams each containing around 273,600 billion protons shoot through the massive collider in opposite directions, slamming into each other with a joint energy level of 13 TeV to produce two billion collisions a second.

"We are really at an energy level that enables discoveries," he said, adding that he expected the lab to have clarity by the end of summer on whether the data "bump" was more than "statistical noise".

Bordry added that the proton smasher is due to run until 2019.

"If we have nature on our side, I think we will discover new particles and open a new road for physics beyond the Standard Model," he said.