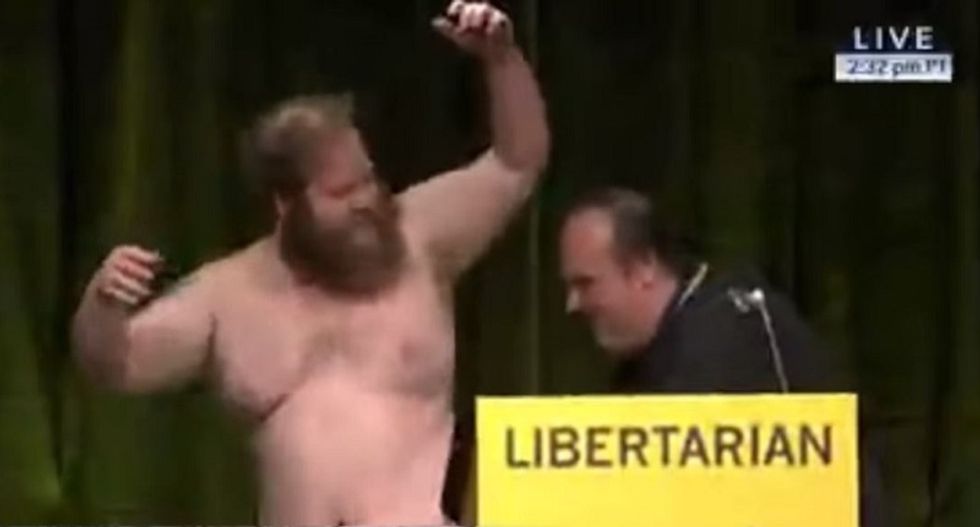 Hunter S. Thompson once wrote that "when the going gets weird, the weird turn pro." Perhaps even Thompson, who gained fame writing about motorcycle gangs and U.S. politics in the tumultuous '60s and '70s, never imagined things would get as weird as they have in 2016.

A YouTube video posted Saturday reportedly shows James Weeks drop out of the race for Libertarian Party chair by accepting a dare to strip down to a thong on live television.

The video shows Weeks turn on music, then start clapping and dancing, before he takes off all his clothes, except his underwear. He appeared to be broadcast live on CSPAN.

According to the Washington Times, he was at the Libertarian National Convention in Florida and started out by telling the crowd, "I thought we could use a little bit of fun."

At the end of his routine, he seems to lose the crowd and tells them, "I'm sorry, that was a dare."

While many are booing, some in the video can be seen laughing hysterically.

Watch Weeks carry out his dare, as posted to YouTube, here: