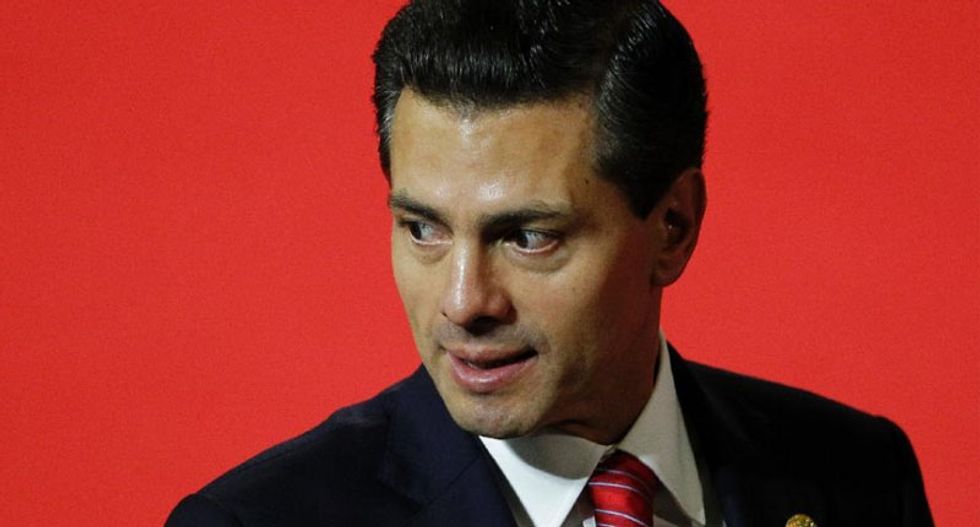 President Enrique Pena Nieto on Tuesday proposed a constitutional reform that would legalize same-sex marriage across Mexico, making it join a handful of Latin American countries allowing such unions.

Pena Nieto said he would send the landmark initiative to Congress after the Supreme Court last year declared it unconstitutional for states to ban same-sex marriage.

"I do this with the conviction that the Mexican state must prevent discrimination for any motive and ensure equal rights to all," he said on the government's website.

"This way, equal marriage will be clear in our constitution," Pena Nieto said earlier at an event marking the national day against homophobia.

The Mexican leader also added rainbow colors to his pictures in his Facebook and Twitter accounts and met with representatives of the lesbian, gay, bisexual and transgender community.

Mexico City has authorized gay and lesbian marriages since 2009 and three of the nation's 31 states have followed suit. A fourth state, Campeche, has approved legislation that has yet to come into force.

Although the Supreme Court's landmark "jurisprudence" does not oblige states to change their laws, it requires courts to rule in favor of same-sex couples whose marriages are rejected.

Pena Nieto presented another initiative requiring the foreign ministry's passport office to accept birth certificates in which a person's gender has been changed.

Constitutional reforms must be approved by a two-third majority of Congress, where Pena Nieto's Institutional Revolutionary Party and its allies hold a majority. State legislatures must then approve the legislation before the president can sign it into law.

Not everyone supports the proposal, however.

The spokesman for the archdiocese of Mexico, which boasts the world's second-largest Roman Catholic flock, said the Church "absolutely disagrees" with Pena Nieto's initiative.

"We deeply regret that the president presented this initiative," Hugo Valderama told AFP, adding that it was "unnecessary" following the top court's ruling.

Pena Nieto should focus on other pressing issues such as drug violence and the economy, he said.

"It seems that the president obeys an international agenda of these homosexual lobbies," he added.

- Among the few in Latin America -

Argentina was the first to legalize same-sex marriage in Latin America, in 2010.

Lawmakers in Uruguay followed suit in 2013 and Brazil authorized same-sex marriage under a court ruling the same year.

Same-sex marriages are also legal in various other countries, including Britain, Canada, South Africa and the United States.

Around 12 million of Mexico's 120 million people identify as lesbian, gay, bisexual or transgender, according to the government.

The Mexico branch of the Office of the United Nations High Commissioner for Human Rights welcomed Pena Nieto's announcement, urging lawmakers to "recognize the rights of people of the same sex to marry."

The measure "is a response to the struggle that citizens have undertaken since 2012 to expose the violations in the civil codes," said Alex Ali Mendez, attorney for the gay rights organization Mexico Equal Marriage.

However, "one announcement by the president won't be enough," he added. "We need reforms and we have seen (state) legislatures be very reluctant."

Another problem, he said, is that some clerks granting marriage certificates to same-sex couples are not giving their children birth certificates.

"The president's announcement could make the other issues move forward with fewer obstacles," Mendez said.

Some 500 gays and lesbians celebrated the national day against homophobia by kissing in front of Mexico City Fine Arts museum.

Among them, Rocio Moreno, 26, said she is not allowed to accompany her girlfriend to public hospitals.

"I hope there are more proposals for our community."