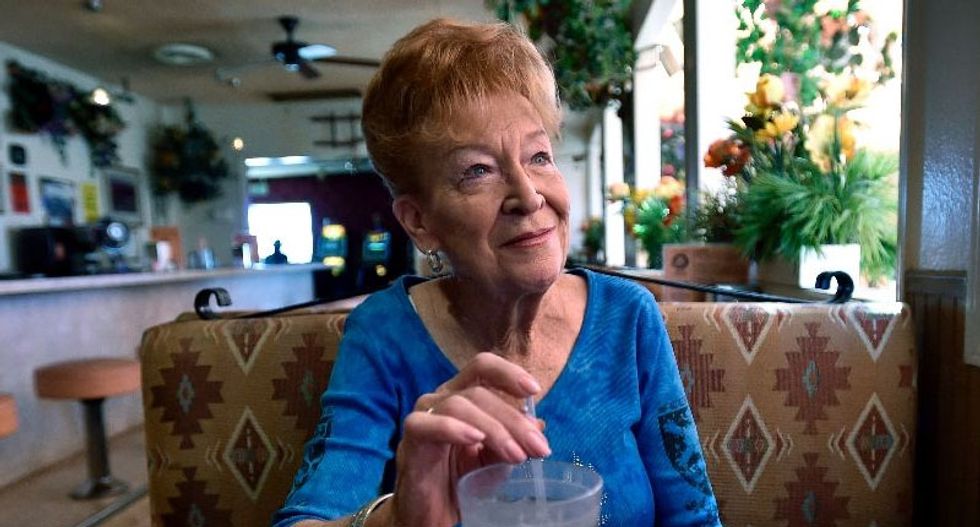 A half-century ago Nancy Kidwell and first husband Slim turned a triangle-shaped gravel airstrip abandoned by the US military into a thriving community that featured a casino, store, camper van park, motel, bar and restaurant (AFP Photo/David Becker)

Nancy Kidwell is a modern-day pioneer of the American desert, a rough-riding frontierswoman who built an entire town amid the lonely Yucca trees and sturdy sagebrush, where nothing existed before.

A half-century ago, Kidwell and first husband Slim turned a triangle-shaped gravel airstrip abandoned by the US military into a thriving community that featured a casino, store, camper van park, motel, bar and restaurant that drew high-desert wanderers from thousands of miles around.

Many travelers landed in private planes to frequent this gambling state's first-ever fly-in gaming emporium, that once advertised "seven hours of fun" where one-armed bandit aficionados could touch down in the late afternoon and taxi out that same night.

Now it's all up for sale -- a couple's dreamscape of 350 hardy residents, carved from hardscrabble land an hour south of Las Vegas, where Nevada's narrow southern tip comes within 10 miles of both California and Arizona.

For the 78-year-old Kidwell, the sale is bittersweet. This patch of desert is all she's known since she and Slim first flew over the arid expanse in 1965, gawking at the isolation and sheer beauty of the spot they'd chosen to make a break from the California rat race.

But now her beloved Slim is long gone -- a victim of Alzheimer's disease in 1983 -- and Kidwell has grown weary of working seven-day weeks supervising 22 employees, playing the role of the town's mayor, police chief and sole businesswoman.

She wants to travel, maybe buy another airplane for a tour of the nation's parks -- Yosemite, Yellowstone and Gettysburg included.

"I'm going to find out what you do after you spend 51 years of your life working in one place," she said, "when you suddenly don't have to wake up at 5 am each day to get the work done."

Kidwell is selling a full square mile along US Highway 95, with 500 acres (202 hectares) of the parcel ready for immediate development.

After all, she and Slim already did the back-breaking work of building the infrastructure, bringing in utilities and digging the wells.

Years ago, when Kidwell put the town up for sale at $17 million, two developers got into a bidding war before the real estate market collapsed and her well-laid plans turned back to dust.

Now, at a mere $8 million, Kidwell is seeing sizable interest: "My broker says the whole thing has gone viral."

She has no idea what her town will become once it's sold, but has received calls from people who want to turn it into everything from a renewable energy project, motorsports park, guest ranch, survival school or shooting range.

Recently, Kidwell sat in the casino restaurant, drinking coffee and eating a biscuit and gravy, her frame still beanstalk-slim, her reddish hair worn in the same coiffed swirl she's kept for, well, forever.

Kidwell was born in rural Utah and later moved to Southern California, where the young adventuress made enough money in her airfield secretarial job to take flying lessons.

That's when she met Slim Kidwell -- she was 28 and he was 62, and the couple launched on a spring-autumn relationship that would provide the adventure of two lifetimes.

One day, Slim got lost flying back to Torrance from Minnesota and passed a windswept desert airfield, an outpost where he decided to stake a claim for his future.

To take ownership from the government under a land-settlement act, the couple had to develop a water source and grow some kind of crop for at least one season.

They moved into an odiferous old trailer abandoned by some Wyoming cowboys. While they worked the land, they hauled in their water in 55-gallon drums as Kidwell dealt with her new neighbors -- the rats, squirrels, jackrabbits, coyotes and free-range cattle.

People laughed at their foolishness -- friends had a good cackle over Slim Kidwell and his "blue-sky dreams" -- which just made the couple work harder.

Slowly, the desert came to life. They built a mobile home park and gas station, then opened the Cal-Nev-Ari Casino, building backyard hangars for pilots to stash their planes. They opened what they lovingly called the Blue-Sky Motel. Eventually, people moved here. The government put in a post office and a fire depot.

When Slim got sick with Alzheimer's, a son from a previous marriage, Ace, came to help care for his father.

After Slim's death, Nancy and Ace eventually fell in love, and the couple married. She says she knew what a sacrifice he'd made, selling his business in California, and wanted to make sure he'd be set financially if she were to die.

Both father and son, members of a secretive club for male aviators known as the Quiet Birdmen, are buried out by the gravel runway -- their markers bearing the group's slogan "Gone West" with an image of a plane taking off toward the sunset.

Many of Kidwell's employees are divided by the sale. They don't want the town's matriarch to step down, but she's promised to take them on a Hawaiian vacation once the sale goes through.

For now, Kidwell still wakes at 5 am, hoping to stay on as a consultant for any new buyer. When her time finally comes, she wants to be buried out on the airfield next to her men. She's already got the tombstone with the same markings as Slim and Ace.

Everything is in place except for that final date.

"I keep the marker out in the hangar wrapped in canvas," she says with a smile. "I didn't want to leave anything to chance."