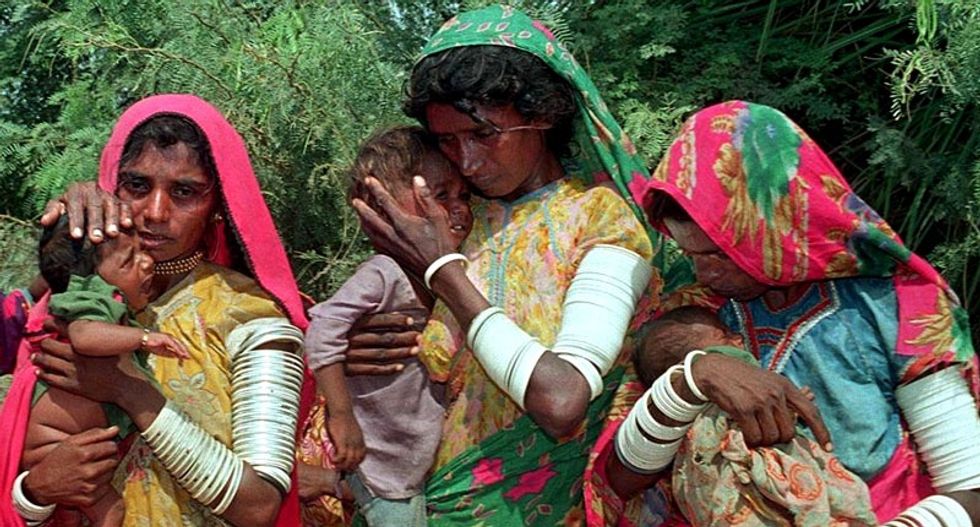 Three freed women slaves hug their children after being rescued by authorities as they arrive in the town of Matli, northeast of Karachi, Pakistan, on September 13, 1998 (AFP Photo/Yousuf Nagori)

It touches the food we eat and the air we breathe, the clothes we wear and possibly the device you’re using to read these words. But slavery today is a paradox. It is hidden away as never before, but its effects are everywhere. If slavery were a country it would have the population of Canada and the GDP of Kuwait, but its CO2 emissions would rank third globally after China and the US.

The latest measures of global slavery conservatively estimate there are about 36m slaves worldwide, spread across virtually all countries. The UN says slavery generates some US$150 billion annually. These numbers seem immense, but the number of slaves represents only a small amount of the global population. While US$150 billion is a tiny fraction of the global economy and is spread across several million local criminal enterprises. 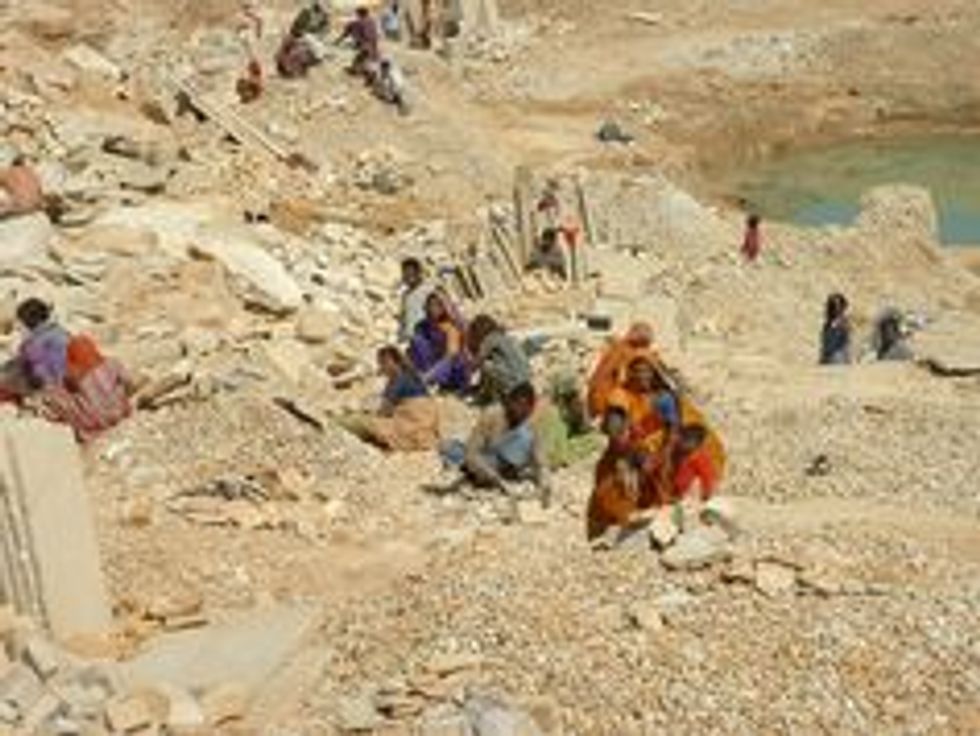 Enslaved families quarrying for paving stones in India – the site carved out of a national forest.

In all of human history, slavery has never been such a small part of our shared existence. Slavery is illegal in every country, it is condemned by every faith, and business and government leaders are unanimous in rejecting it. Slavery has been pushed to the very edges of our global society, but it is still destroying lives and the natural world at an alarming rate because the criminal gangs who employ slave labour are often involved in pollution and deforestation as part of their work.

As part of my research, I met 19-year-old Shumir in a village at the bottom of Bangladesh. Just the night before he had escaped from slavery by stowing away in a fishing boat. He was lured into slavery, he said:

A recruiter told my parents he would give them 2000 taka [US$29] if they’d let me come and work on a fish camp … The man said the work was easy, and there was plenty of food to eat. My parents needed the money and I wanted to help, so I left with the recruiter.

It was a lie. Shumir and dozens of other boys would often work 24 hours straight. “The longer I worked,” he told me, “I’d get exhausted and clumsy. Sometimes I’d cut myself with the gutting knife or slip and fall from the drying rack. Whenever I made a mistake the boss would hit me”.

Yet more feared than the bosses were the tigers. Every boy I met from the fish camps reported having witnessed or having known another child slave who had been eaten by a tiger. These accounts came about because criminal slaveholders had carved fish processing camps from the forests of the Sundarbans UNESCO World Heritage Site – a natural habitat for protected Bengal tigers in the area. 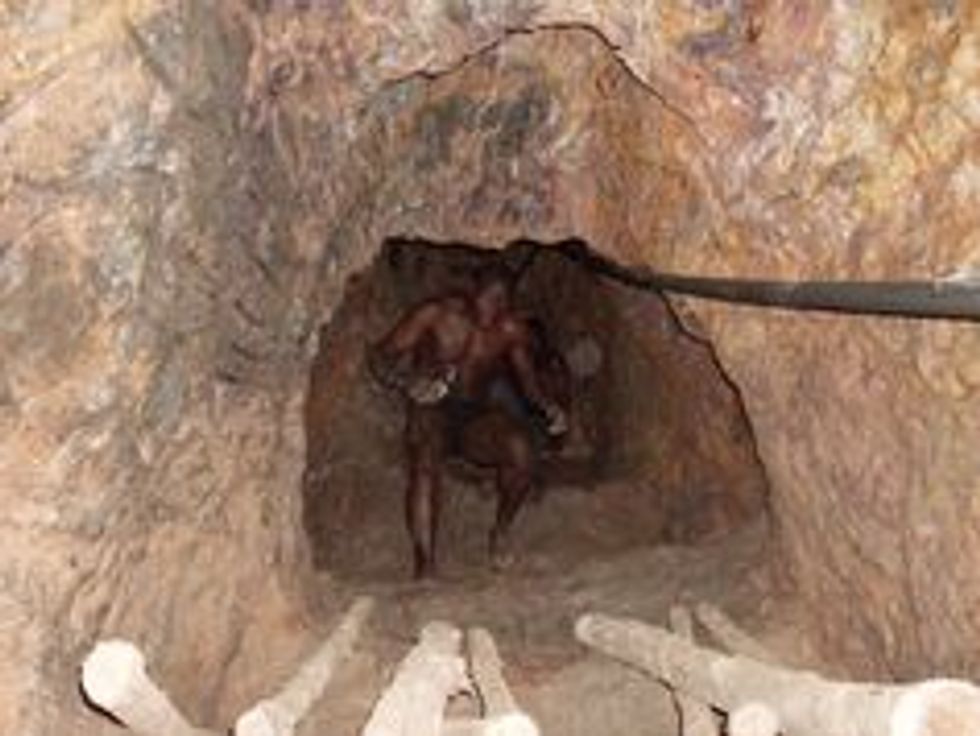 Enslaved gold miner in an illegal mine in Ghana.

This vast area of protected mangrove forest is also the largest carbon sink in Asia – which basically means that it absorbs more carbon that it releases and is particularly key to the environment. The forest also functions as a crucial buffer protecting coastal towns from cyclones. Invaded by criminal gangs, their slaves clear cut the forest, feeding CO2 into the atmosphere and set the collision course of slave children and protected tigers. The profits driving this destruction come from the global market for shrimp and pet food, but it doesn’t have to be this way.

The fish camp where Shumir was enslaved is just one of thousands of slave-based enterprises in agriculture, mining, brick making, timbering, charcoal making, and other businesses spread around the world’s equatorial belt, the vast majority of which cause pollution and deforestation as part of their everyday work. But understanding the link between slavery and climate change can help to solve both problems.

In Brazil I met a former slave named Jose Barros who had previously worked down the mines. He turned his life around in 2005 when he was granted access – but not ownership – to 100 acres of Amazonian forest. This was assisted by a local cooperative of small farmers organised by the Pastoral Land Commission – an offshoot of the catholic church in Brazil. As part of their project to tackle both slavery and climate change they provided Barros with cocoa seedlings that he planted beneath the big canopy trees. In return he had to leave 60% of the forest intact. 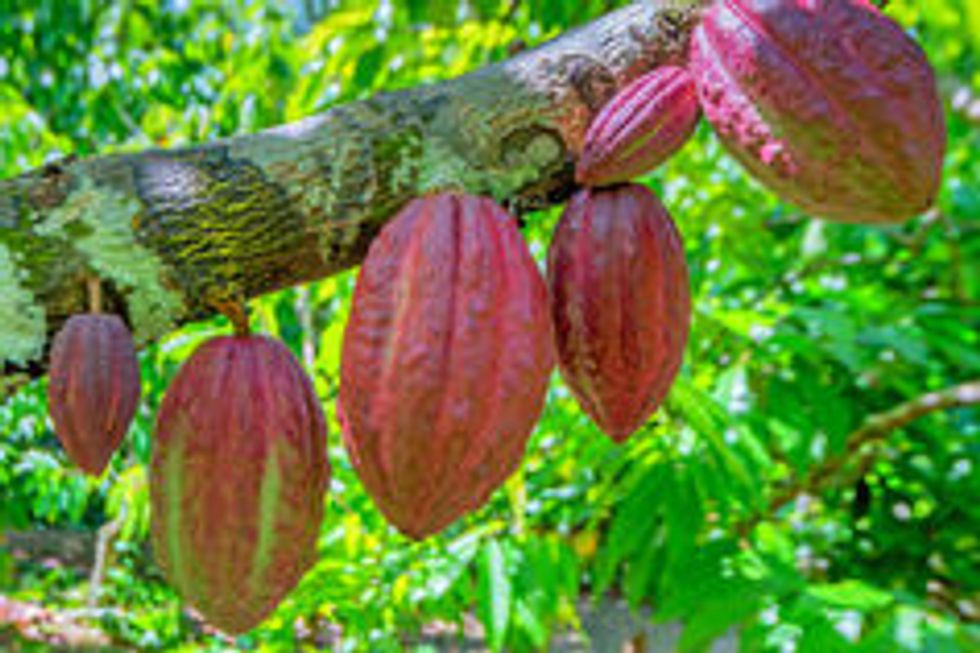 Could cocoa seedlings hold the key?

When the cocoa pods began to grow, “that’s when our lives began to change". He told me how he sold about 1,000 kilos of cocoa and for the first time ever was able to buy more than just the food his family needed. His children went to school and their lives improved dramatically. The forest is now preserved and guarded. Barros plants new trees and harvests other cash crops like Brazil nuts that grow naturally.

A concerted effort to end slavery around the world is a big investment, but one that can have a huge global impact. Enforcement of the anti-slavery laws that are on the books in every country would immediately diminish CO2 emissions and species loss. In developing countries ending slavery can stimulate the economy, ward off the threat of rising sea levels or destructive deforestation, and preserve endangered species. Freed slaves can also be paid to replant the forests they were forced to cut. This would not only help to rehabilitate the land, but it would also help to give work and a wage to some of the people who need this most in the world.