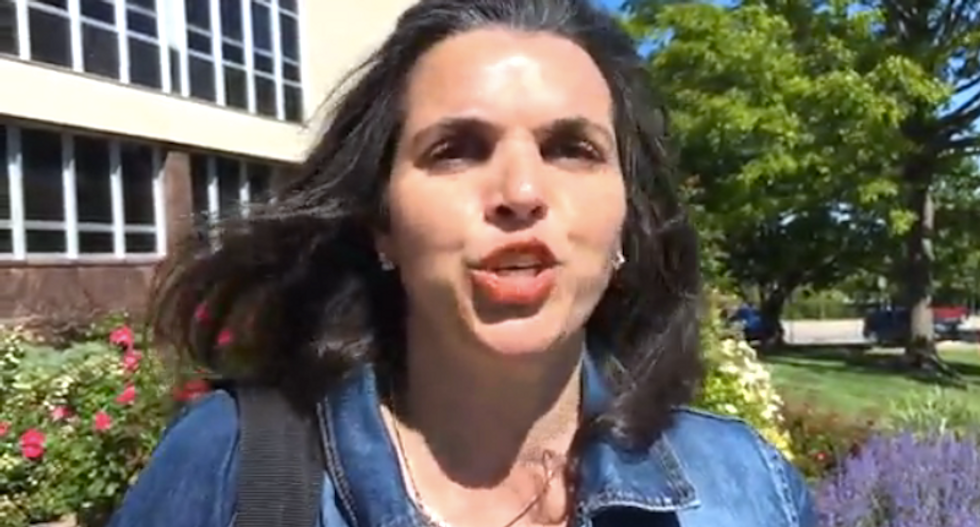 Five children who entertained armed militants earlier this year at an Oregon standoff waited until their mother took a shower before grabbing her guns and seeking refuge from her alleged abuse.

The children, who perform as the Sharp Family Singers at right-wing demonstrations, got a ride from a neighbor Friday and went to the sheriff's office -- where they detailed their allegations of beatings and other abuse, reported the Kansas City Star.

They testified Wednesday during a 2 1/2-hour hearing in Shawnee County that their mother, Odalis Sharp, beat them several times a week with a rod and belt, shoved soap in their mouths, called them names and slapped their faces and private parts.

A social worker also testified that Sharp refused to cooperate during a neglect investigation earlier this year and then during a follow-up report of emotional and physical abuse.

“They said it’s typical to always receive some type of bruising and other times have bled from the swats,” the social worker testified. “The children told me they were fearful. They did not want to return to their mother.”

A sheriff's deputy testified that one boy who fled told investigators that his mother had beaten one sibling until the child's nose bled -- and continued to beat the child.

“He described a spanking that consisted of 47 swats,” the deputy testified. “He described that after 27 spankings, the child started to bleed from the nose, and 20 more spanks occurred after that.”

Sharp admitted to using a rod to punish her children.

“A lot of my friends know that I use a rod," Sharp testified. “That is not a secret.”

Their father, who divorced the children's mother in 2012 and now lives in Denver, cried during their testimony, and a judge found probable cause to place seven of Sharp's 10 children into temporary custody of the Kansas Department of Children and Families.

Sharp, who was arrested Friday but not charged in connection with an assault on a law enforcement officer serving an eviction notice, angrily denied the allegations of abuse outside the court hearing.

“We need to turn to God, because the system is corrupt,” Sharp said. “They lie, they twist, they make false charges, they abuse people, and then they turn around and put people in prison, and then they accuse them of abuse.”

That's pretty much what Sharp said the last time one of her children was removed from her care and placed into protective custody over previous abuse allegations.

Sharp said her son, then 15, had run away from home because he was unhappy with “the right, wholesome and pure path in which I was leading him — in which God was leading us.”

The single mother of 10 dragged seven of her children to the Malheur National Wildlife Preserve, where they sang patriotic and religious songs for the armed militants who took over the federally owned land and refused to leave until their anti-government demands were met.

Many of those militants have been arrested on a variety of federal charges, and Sharp's daughter, Victoria Sharp, witnessed the FBI fatal shooting of militant rancher LaVoy Finicum.

The 18-year-old Sharp has become a right-wing celebrity after accusing federal agents of "murdering" Finicum as he attempted to surrender -- although many of her claims are not supported by video and other evidence.

The mother claimed she was being punished by the government.

“The federal government hates us right now, because my daughter is a primary witness of a murder they committed,” Odalis Sharp said. “And so what do they do? They want the Sharp family out, and so they divide and conquer.”

"They don't listen to the truth," she added. "There is no truth."

Watch Sharp discuss the allegations against her in this video posted online by the Kansas City Star: