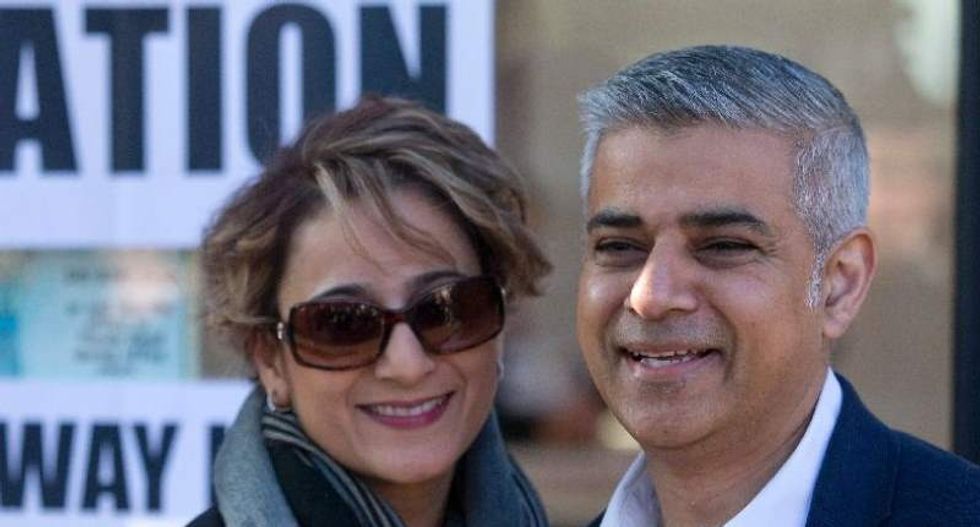 At the Lahore Karahi restaurant in south London, customers and staff celebrated Friday as it became clear the capital was to have its first Muslim mayor, shouting out in Urdu, "Sadiq Khan Zinda Baad!" (Sadiq Khan well done!)

A favourite haunt of the Khan family, the restaurant in the south London district of Tooting -- where the 45-year-old son of a Pakistani immigrant bus driver is the local MP -- buzzed with excitement.

"We are happy now but he has to fulfil the promises he made," said waiter Shehzad Azhar, 30. "The housing crisis and the transportation come first."

"He will do good things," added fellow employee Malik Ahmed, 32.

Khan's victory came after a straight fight with his conservative opponent, ecologist Zac Goldsmith, son of the late tycoon financier James Goldsmith and a scion of one of Britain's wealthiest families

The lack of affordable housing and the overcrowded transport system were key concerns for many Londoners, but Khan's faith also became an issue in an unusually negative campaign, with Goldsmith seeking to establish links between Khan and Muslim extremists.

Outside Khan's mosque, 50-year-old Asim said: "He is above the polemics. He ran a very clean campaign, very honest, and that's what Londoners liked."

Khan, a former human rights lawyer and Labour government minister, was attacked by both Goldsmith and Prime Minister David Cameron for allegedly voicing support for Muslim extremists in past.

Tooting-born Khan. who grew up in public housing in south London, dismissed the claims as "desperate", insisting he did not have extremist views.

Some Conservatives voiced concern that the attacks on him could hurt Muslim community relations.

Businessman Shahzad Saddiqui said Khan's background would help him to bring Londoners together.

"Sadiq Khan will have a unifying factor because he is Muslim, an immigrant, he is from the working class, so he understands the working-class people and he can associate with them," he said.

"He knows also how the Muslim community is constantly bashed in the media and he will address that."

The latest census showed that 12.4 percent of Londoners are Muslim, 48.4 percent Christian, 1.8 percent Jewish and 20.7 percent have no faith.

The Muslim community is hugely varied, covering multiple ethnic and social backgrounds as well as a variety of moderate and traditionalist views.

In the East End, which has a large Muslim minority, voters said they had cast their ballots for Khan because of his policies rather than his religion.

Fahim Ahmed, a 35-year-old stallholder of Bangladeshi origin selling Islamic dresses at Whitechapel street market, said he was voting for the centre-left Labour party as much as for the individual.

But he welcomed the election of a candidate whose parents emigrated from Pakistan to Britain in the 1960s, saying: "He's from our culture."

At a nearby stall, Sabiha Choudhary was shopping for vegetables dressed in a black robe and green headscarf.

"It will not help only the Muslims, it will make a difference for all communities," she said. "Things will be better for people with not much money like us."