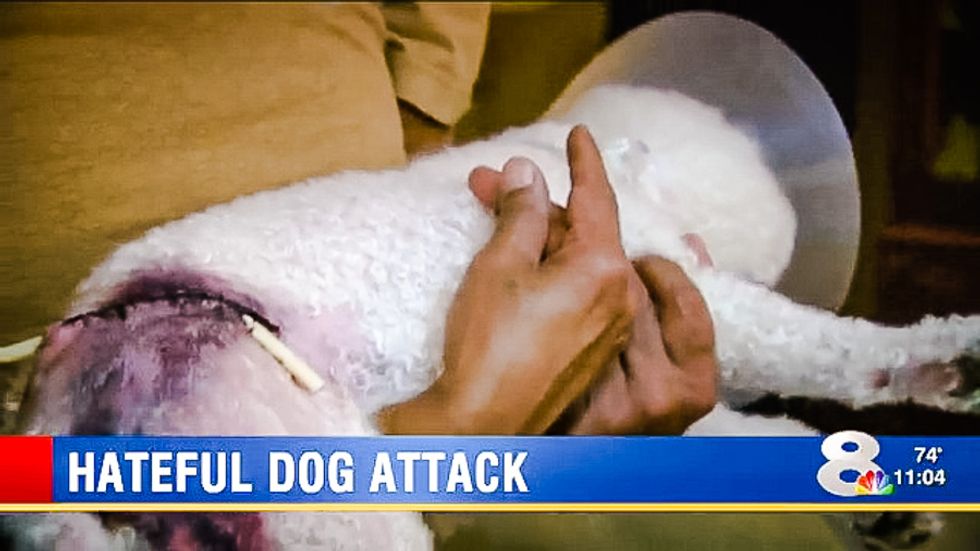 A man from Lake Wales, Florida this week was arrested after he released five dogs to attack a poodle owned by a man who he called a "Muslim terrorist."

Azard Baksh told WFLA that the incident happened on Monday when his poodle, Myra, had stopped to relieve herself near 72-year-old Jackie Hammock's home.

“He came out the side gate. He was nude. Yep, completely nude,” Baksh recalled.

Baksh said that Hammock had threatened to release the dogs previously, telling the poodle's owner he was a "Muslim terrorist, Islamic Muslim terrorist. Go back where you come from."

But on Monday, Hammock followed through with the threat, and sent his five dogs to attack the poodle.

“The big mother dog came and grabbed Myra, shook her like a teddy bear. And I started screaming,” Baksh explained. “He started calling me names and said, ‘Don’t walk in this street, you Muslim terrorist. Stay out of here.'"

Hammock's wife eventually called the dogs back, but Hammock released the dogs a second time. Again, his wife called for the dogs to return, and then Hammock allegedly released them a third time.

Witnesses told police that Hammock was nude each time he came to the door to release the dogs.

“He was standing at his door and I was sitting right there. I had a straight shot. It was very disturbing," neighbor Sue White said.

Myra was taken to a local veterinarian, but the poodle did not survive the night due to internal injuries, according to WFLA.

Officers told WFLA that they had to "plead" with Hammock to put on clothes, and the man admitted to sending his dog to attack Myra.

Hammock is facing charges of cruelty to animals, aggravated assault and exposure of sexual organs.

Watch the video below from WFLA.

Fact-checkers have quickly outlined the inaccuracies in Sen. Lindsey Graham's (R-S.C.) claims about Democratic lawmakers' redistricting initiative. On Friday, June 18, Graham appeared at the Faith & Freedom Coalition's Road to Majority Conference in Florida where he expressed concern about the redistricting provision in the For the People Act.

According to Graham, the provision would "change America forever."

The announcement of the new book title, which is a reference to Trump's infamous quote at the 2016 Republican National Convention, was well-received by commenters on social media, who were quick to celebrate the upcoming takedown of the former president. Many people responded by mocking Trump, and expressing their relief that he was finally out of office.