New Hampshire and Mass. troopers off duty after they're caught beating motorist 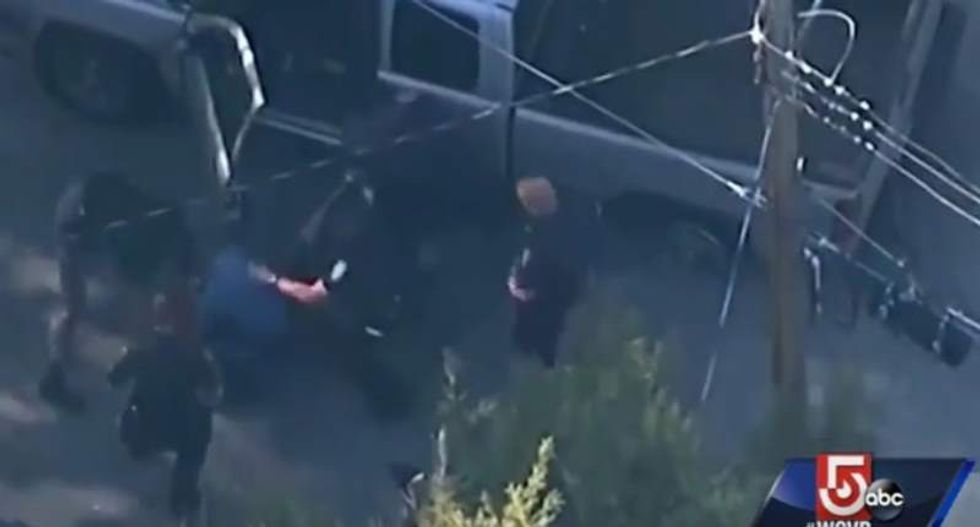 A state trooper from Massachusetts and another from New Hampshire were relieved of duty on Thursday for their involvement in the beating of a motorist that their commanders called "disturbing," officials said.

A video obtained by Reuters and taken from a helicopter showed officers drawing their weapons at the end of a high-speed chase that began in Massachusetts and ended in New Hampshire. The video shows a man getting out of a truck and dropping to his knees and then to his stomach, before he is punched several times by at least two officers and handcuffed.

"The events of Wednesday evening are disturbing," said New Hampshire State Police Colonel Robert Quinn. "The division of State Police does not condone the unjustified use of force and it will not be tolerated."

A New Hampshire trooper who could be seen in the video striking the suspect, Richard Simone, 50, was relieved of duty as the department launched an investigation into his actions, Quinn said.

Massachusetts State Police Colonel Richard McKeon, who also called the incident "disturbing," said he had suspended the officer involved in the incident and called for an investigation.

Neither department named the officers involved and each commander said his department would review all the evidence in the case before making any decisions on the officers' fate.

The incident began Wednesday evening in Holden, Massachusetts, when police tried to stop Simone, who was wanted on several warrants. He refused their orders and led police on a chase that reached 100 mph (160 kph) and ended in Nashua, New Hampshire, officials said.

The use of excessive force by law enforcement has become the focus of national debates, particularly in light of the high-profile killings of African-Americans by mainly white officers over the last several years.

Citizen and officer videos of arrests and killings have heightened scrutiny of police behavior. Simone, along with many of the officers in the video, appeared to be white.

(Reporting by Scott Malone in Boston and Brendan O'Brien in Milwaukee; Editing by Bernadette Baum and Steve Orlofsky)

Watch a report on the incident, as aired on WCVB-TV, below.