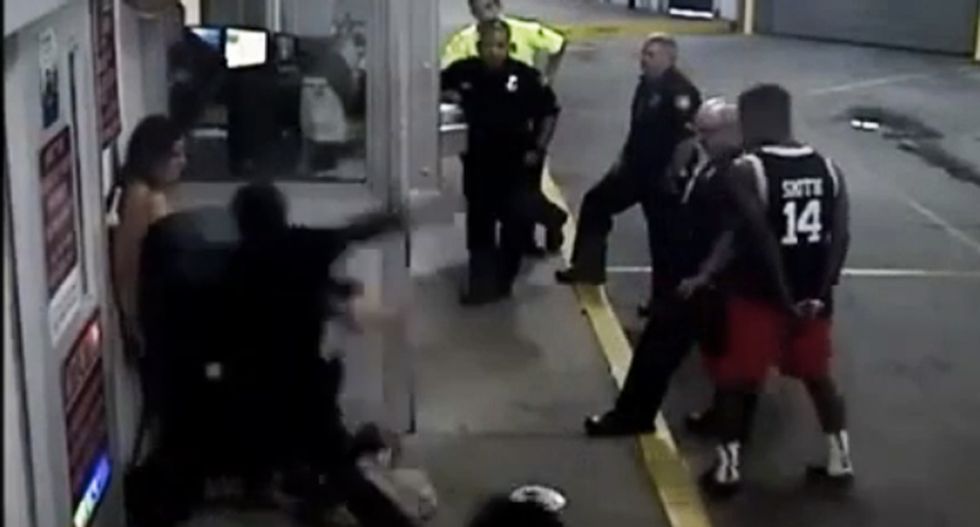 Last month, we saw a shocking video of a rookie police officer brutally beating a handcuffed woman unconscious as three of his fellow officers stood by. Now local news station FirstCoastNews.com has obtained a fuller version of the video that shows the police left 31-year-old Mayra Martinez lying unconscious on the ground for 15 minutes before giving her medical attention. The previously released version of the video cut off shortly after Martinez had slumped over onto the ground.

Although Jacksonville police officer Akinyemi Borisade was fired for beating Martinez while she was being processed at the jail, this new video raises disturbing questions about the behavior of other officers on the scene. Not only did they seem reluctant to intervene while Borisade was punching Martinez, but they also didn't seem at all concerned about getting her help once she was on the ground.

"The beating takes less than a minute, but Martinez is left on the ground as officers and jail staff stand around her for a full fifteen minutes," FirstCoastNews.com writes. "That's until EMTs arrive and spend the next few minutes reviving her. She remains on the ground, however, for another 20 minutes - the first responders leave after a little over ten minutes. The video ends without showing her entering the jail."

According to police, Martinez was arrested this past April after she became drunk and belligerent after she quit her job at a local bar.  In surveillance video taken at the jail, Borisade can be seen placing a handcuffed Martinez against a wall, after which she twice tried to kick the officer with her foot. It was at this point that Borisade repeatedly punched the woman until she fell to the ground.

Check out the news report on the new video footage below.