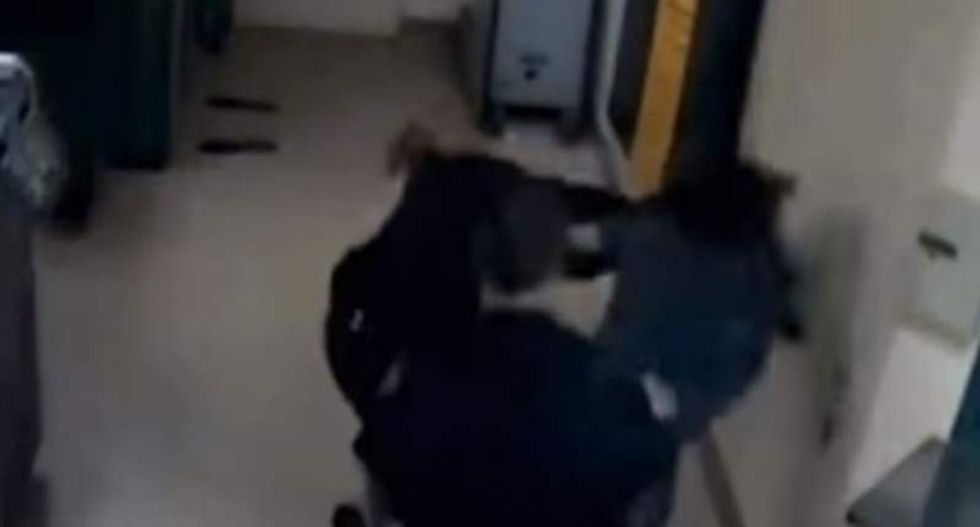 A New York state woman filed a civil suit accusing sheriff's deputies of taking pictures of her in the nude after she was knocked out in a jailhouse altercation, WHEC-TV reported.

The footage captures Jennifer Merrow being thrown into a wall by Monroe County Deputy Raelle Ashley after she was booked for driving while intoxicated in December 2014. Merrow is seen struggling to put a jacket on when Ashley initiates the attack, while another deputy tries to restrain her. After more deputies enter the room, Merrow is placed in restraints and taken out of the room with her head covered.

"She is a fairly young, fairly petite person," Merrow's attorney, Anjan Ganguly, told the Rochester Democrat and Chronicle. "This is not some common criminal. She is gainfully employed. She is married. This is not a situation where some in the public go, 'Oh, that person had it coming.'"

According to the lawsuit, Merrow woke up naked inside a holding cell in full view of several deputies, at which point at least one male deputy ordered her "to take various poses so that she could be photographed." That deputy, along with others, then allegedly took photos of her on their cell phones.

Photography Is Not A Crime reported that Merrow was convicted of assaulting Ashley in part because of the video evidence, and that a citizen review board cleared deputies of any wrongdoing in connection with the footage.

"This case is a reminder of the real dangers faced by police officers and jail deputies on a daily basis," Assistant District Attorney Christine K. Callanan said in a statement.

Ganguly said she was given probation on a misdemeanor DUI charge and sentenced to time served on her assault conviction, which she is currently appealing.

"My client is not anti-cop, anti-law enforcement," he told WHEC. "She's not looking to make a name for herself. I feel most law enforcement officers are probably upstanding, hardworking people but in this instance she was very clearly wronged -- deeply wronged. And I think she's looking for justice to come out of this."

WHEC's report on the lawsuit can be seen below.

Footage of the attack in its entirety, as posted by Photography Is Not A Crime, can be seen here.