Obama slams Donald Trump in Rutgers commencement speech: 'Ignorance is not a virtue' 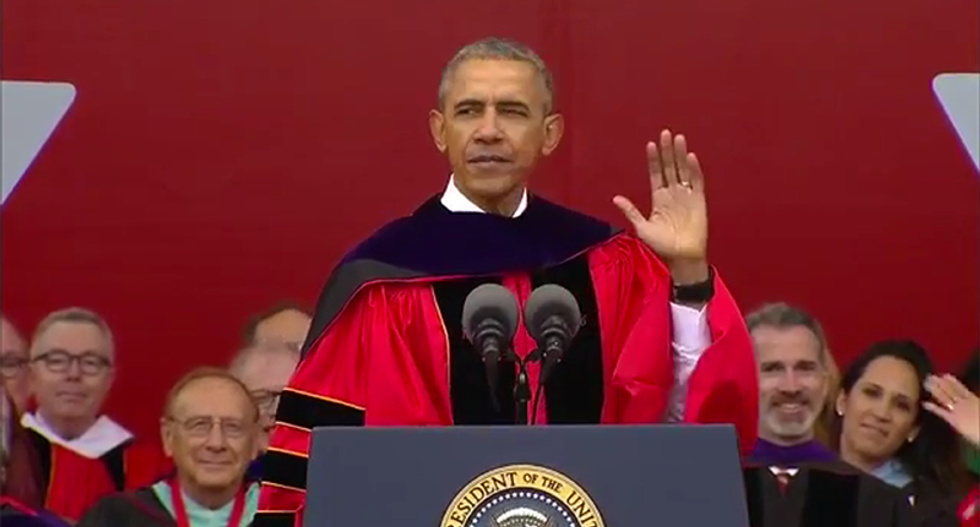 During his commencement speech to Rutgers University, President Barack Obama told the New Jersey crowd that when it comes to politics and life "ignorance is not a virtue."

According to a White House transcript of the speech, Obama explained, "Facts, evidence, reason, logic, an understanding of science: These are good things. These are qualities you want in people making policy. ... That might seem obvious. ... We traditionally have valued those things, but if you're listening to today's political debate, you might wonder where this strain of anti-intellectualism came from."

Obama continued, "When our leaders express a disdain for facts, when they're not held accountable for repeating falsehoods and just making stuff up, when actual experts are dismissed as elitists, then we've got a problem."

Obama's full remarks which you can watch below, seem to be in stark contrast to the presumptive Republican nominee Donald Trump.

"The world is more interconnected than ever before, and it's becoming more connected every day," Obama said. "Building walls won't change that," Obama said, in reference to Trump's plan to build a wall along the U.S./Mexico border. "The point is: To help ourselves, we've got to help others, not pull up the drawbridge and try to keep the world out."

Obama then attacked Trump's proposed ban on Muslims entering the United States. He explained "isolating or disparaging Muslims" and "suggesting they should be treated differently when it comes to entering this country" isn't an American value.

"That's not just a betrayal of who we are," he said. "It would alienate the very communities at home and abroad who are our most important partners in the fight against violent extremism."

This isn't the first time Obama has attacked Trump. Just last week, Obama referenced Trump's race for president saying "this is not a reality show."

Check out the clip below:

See the full speech below: