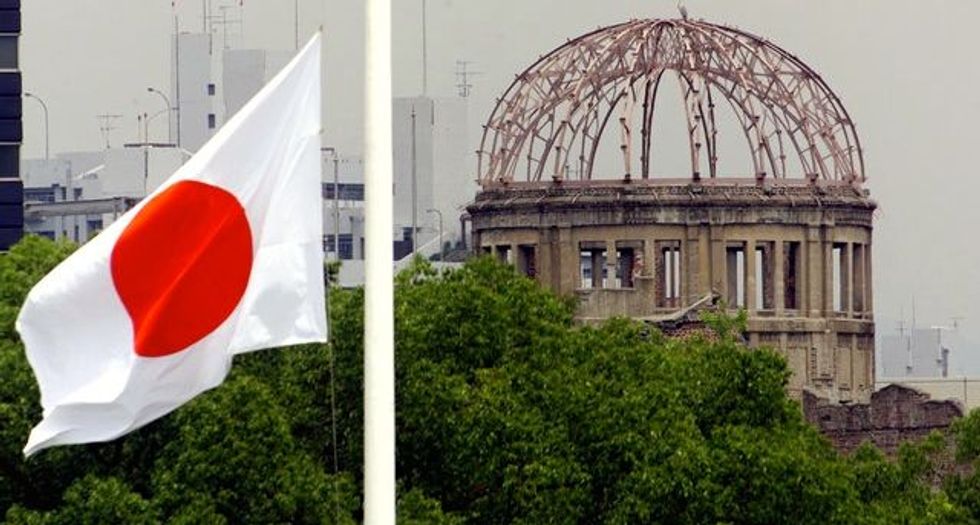 After accepting an invitation from the Japanese government, Barack Obama has become the first sitting president of the US to visit Hiroshima, the site of the first ever atomic bombing.

Speaking in front of the Hiroshima Peace Memorial, a devastated building painstakingly preserved in remembrance of the bomb’s impact, Obama struck a deeply emotional tone:

71 years ago, on a bright, cloudless morning, death fell from the sky and the world was changed. A flash of light and a wall of fire destroyed a city, and demonstrated that mankind possessed the means to destroy itself.

Why do we come to this place, to Hiroshima? We come to ponder a terrible force unleashed in the not-so-distant past. We come to mourn the dead, including over 100,000 Japanese men, women and children, thousands of Koreans, a dozen Americans held prisoner. Their souls speak to us. They ask us to look inward. To take stock of who we are, and what we might become.

As expected, he offered no American apology for the bombings. Instead, he chose to look forward, calling for the bombings to be remembered “not as the dawn of atomic warfare, but as the start of our own moral awakening”.

Obama’s precise reasons for accepting the Japanese invitation to Hiroshima remain unclear. Perhaps the time was simply right; perhaps he wanted to reinvigorate his aspirations for a nuclear-free world, an idea he outlined in his famous 2009 Prague speech and for which he won the Nobel Peace Prize.

But his visit is also a diplomatic victory for Japan’s controversial prime minister, Abe Shinzō. The sheer impact of a serving US president visiting Hiroshima will help boost Abe’s credentials as a “proactive pacifist”, a savvy international heavyweight who persuaded an American president to pay respect to those killed by the atom bomb and its aftermath.

Obama’s detractors in the Republican Party will be poring over the transcript of his speech for any shadow of an implicit apology, ready as ever to rain outrage on their sworn enemy in the White House. China was keeping a watchful eye as well. The Chinese media warned Japan to avoid “whitewashing” its World War II history to appear as a victim rather than a belligerent. Beijing has already invoked the Harry Potter villain Voldemort to paint Japan as an unrepentant evil intent on upsetting the postwar international order.

Japanese public opinion, meanwhile, appears somewhat divided over whether or not an apology from the US is even necessary. Some atom bomb survivors (known as hibakusha) would like one, while others seem content with the significance of the visit itself, suggesting that it is now time to move on.

The politics of contrition

Obama’s words notwithstanding, this visit speaks volumes about the way he sees the events of August 1945 and the US’s responsibility for them. Visiting Hiroshima is essentially an acknowledgement that the US recognises and honours the full impact of what happened there and in Nagasaki.

And while nothing concrete is likely to emerge from the visit in the way of global nuclear policy, Obama seems keen to leave his mark as someone who cares enough about this history to risk a severe conservative backlash at home.

All this has intriguing implications for Abe as well. He makes no secret of his nationalist credentials and his ambition to amend Japan’s pacifist constitution, a project on which he is well-embarked. Abe must be hoping that persuading Obama to visit Hiroshima will help neuter some of his own detractors – particularly those opposing his plans for more military flexibility, as well as enhanced security co-operation with the US.

Then there’s the question of a still-not-forthcoming apology from the US. Many hibakusha seem keen to simply move on, but those who still demand an apology need to bear in mind that in the US’s toxic, polarised political climate, “apologising for America” is tantamount to political suicide.

For now, Japan is celebrating Obama’s decision to visit at all, rather than complaining about the precise wording of his address. In his remarks following Obama’s, Abe thanked the president for his “courage” to visit, and expressed his wish that the friendship between Japan and the US become “a light for hope” for all the world.

But given the extrovert, militaristic turn of his government, many people in the rest of East Asia will interpret Abe’s message sceptically indeed. And given reports that the US’s reduction of its nuclear arsenal has in fact slowed under Obama’s rule, his renewed call for a world free from nuclear weapons doesn’t ring as true as it once did.