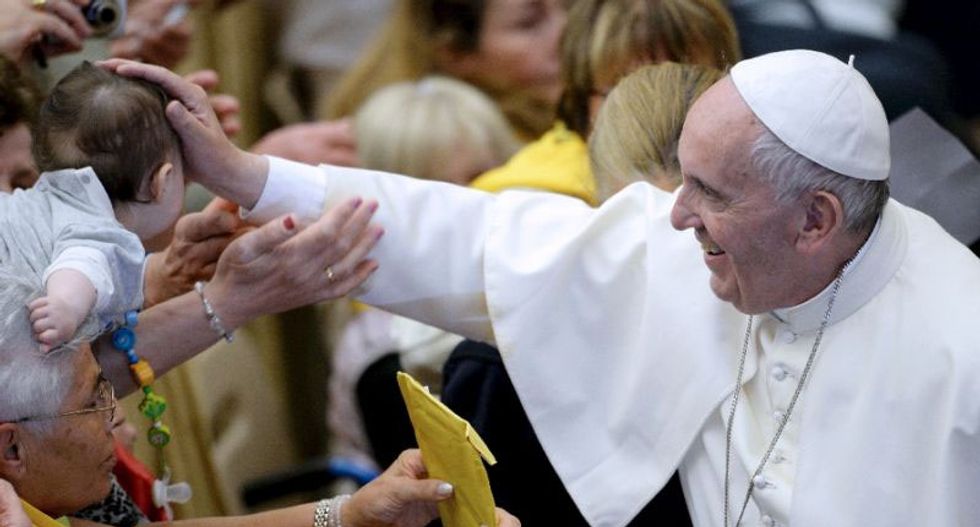 Pope Francis strokes a baby as he greest the crowds at the Vatican, on May 7, 2016 (AFP Photo/Filippo Monteforte)

Pope Francis, in the modest style he has become known for, spoke on Saturday to members of an Italian medical charity working in Africa and evoked his desire to show unity with the poor.

"I ask you please to pray for me too, so that the Lord will make me each day become poorer," he told the organisation "Doctors with Africa", as he praised their work in the poorest "last mile" of healthcare systems in seven African countries.

The pontiff also stressed that heath was "not a consumer good, but rather a universal right, and therefore access to healthcare services cannot be a privilege."

But he also acknowledged that healthcare is still in many countries the privilege of the rich.

"Healthcare, especially at the most basic level, is indeed denied in many parts of the world and many regions of Africa. It is not a right for all, but rather it is still a privilege reserved to the few, to those who can afford it," he said according to a Vatican statement.

He noted that the situation in Africa was particularly critical.

"In Africa too many mothers die in child birth and too many children do not survive beyond their first month of life due to malnutrition and illnesses," he told the audience of 9,000 doctors and volunteers.

He said the medical charity was carrying out its work "with courage as the expression of a Church that is not a 'super clinic for VIPs' but rather a 'field hospital'. A Church with a great heart, close to the many wounded and humiliated of history, in the service of the poorest."

The Doctors with Africa group, also known by its Italian initials CUAMM, was founded in Italy 65 years ago by a doctor and a priest and has missions in Uganda, Tanzania, Mozambique, Etiopia, Angola, South Sudan and Sierra Leone.