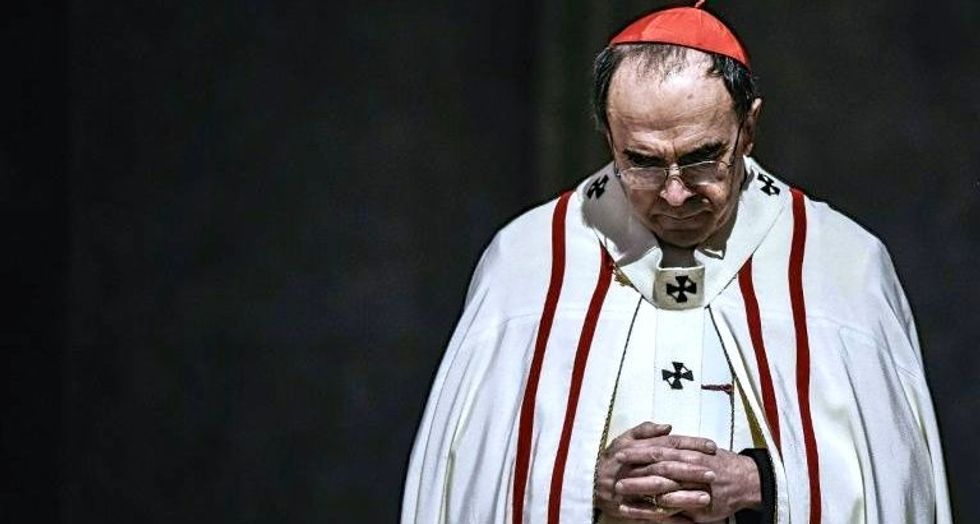 Pope Francis has ruled out seeking the fast-track resignation of a French cardinal accused of failing to inform the authorities about an alleged paedophile priest, the French newspaper La Croix reported on Tuesday.

In an interview with the Catholic daily on Monday, the pope said it would be "contradictory, imprudent" to seek Cardinal Philippe Barbarin's resignation at this stage.

"We will see after the end of (any) trial. But (to seek his resignation) now would be to imply guilt," the pontiff said.

Francis said he believed Barbarin had "taken the necessary measures, he took things in hand. He is brave, creative, a missionary. We should now wait for the outcome of the civilian judicial procedure."

Barbarin, the archbishop of Lyon, France's second largest city, is facing a storm over his handling of allegations against Father Bernard Preynat, accused of sex attacks on four boy scouts between 1986 and 1991.

Preynat was placed under formal investigation in January, but his lawyer argues the alleged crimes are now beyond the statute of limitations.

In March, prosecutors in Lyon ordered a preliminary investigation into three accusations by civilian plaintiffs that Barbarin's diocese knew about the scandal a number of years ago but failed to inform the authorities.

According to the diocese, Barbarin first received testimony from an alleged victim in mid-2014, and relieved Preynat of priestly office in May 2015.

An association called La Parole Liberee ("The Liberated Word") says it has identified between 50 and 60 victims.

In other comments he made to La Croix, the pope floated the idea of visiting France, but said he was unable to say when it would take place.

"Last year, some suggestions started to be made about a trip of this kind, comprising a stop in Paris and its suburbs, in Lourdes and in a city where no pope has been, Marseille for example, which represents a gate that is open to the world," Francis said.

"I recently received an invitation from President Francois Hollande. The episcopal conference also invited me," he said, adding, "I don't know when this trip will take place, because next year is an election year in France, and generally the Holy See's practice is not to travel (to a country) in this time."

He described France as "the oldest daughter of the church but not the most faithful!"

That was a reference to a traditional honorific to mark France for its centuries-long support of the Catholic church.

That position has waned as France has become emphatically secular, for instance by enshrining into law the rights to gay marriage, contraception and abortion and curbing public display of religious symbols.

France is "a land of great saints and great thinkers," Francis said, before adding: "The slight criticism that I say with regard to France (...) is that securalism is being overdone."