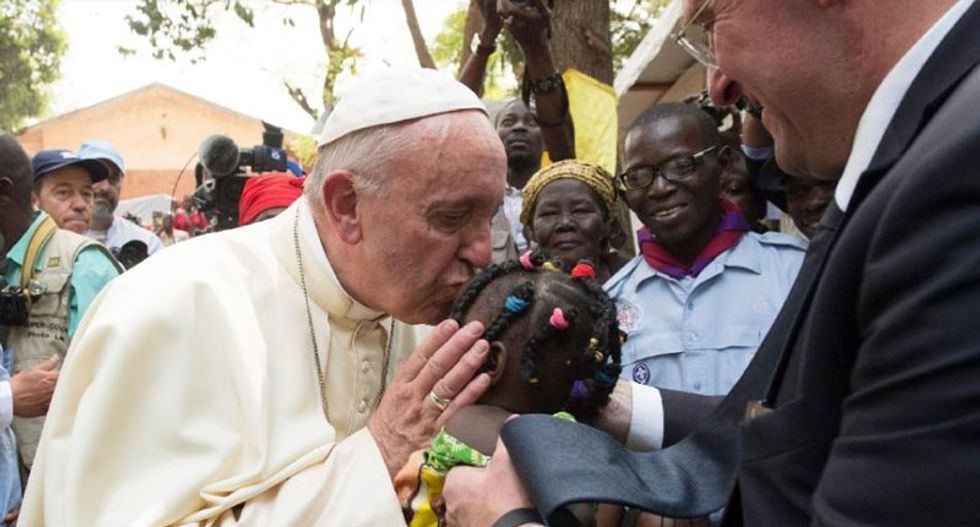 Pope Francis at the refugee camp of St. Sauveur in the Central African Republic's Bangui, on November 29, 2015, during his historic trip to Arfica (AFP Photo/)

You wouldn't like Pope Francis when he's angry, especially if you're a corporate greed-head. Per Reuters, Pope Francis on Thursday issued a thunderous condemnation of "bloodsuckers" who exploit poor workers by underpaying them and leaving them with no long-term economic security.

The pope made these remarks during mass at the Vatican, where he began by talking about a young migrant worker he met who worked 11 hours a day and who took home just $729 per month after being paid under the table. He also decried the use of short-term labor contracts that leave workers in precarious positions after their work ends.

"This is starving the people with their work for my own profit! Living on the blood of the people. And this is a mortal sin," he said. "Without a pension, without health care ... then they suspend (the contract), and in July and August (the workers) have to eat air. And in September, they laugh at you about it. Those who do that are true bloodsuckers."

More than his predecessors, Pope Francis has emphasized the importance of economic justice, and he even met with U.S. presidential hopeful Bernie Sanders earlier this year to discuss the need for morality in the global economy. The pope has also been highly critical of presumptive Republican presidential nominee Donald Trump due to his inflammatory remarks on immigrants and Islam over the course of the Republican primary.