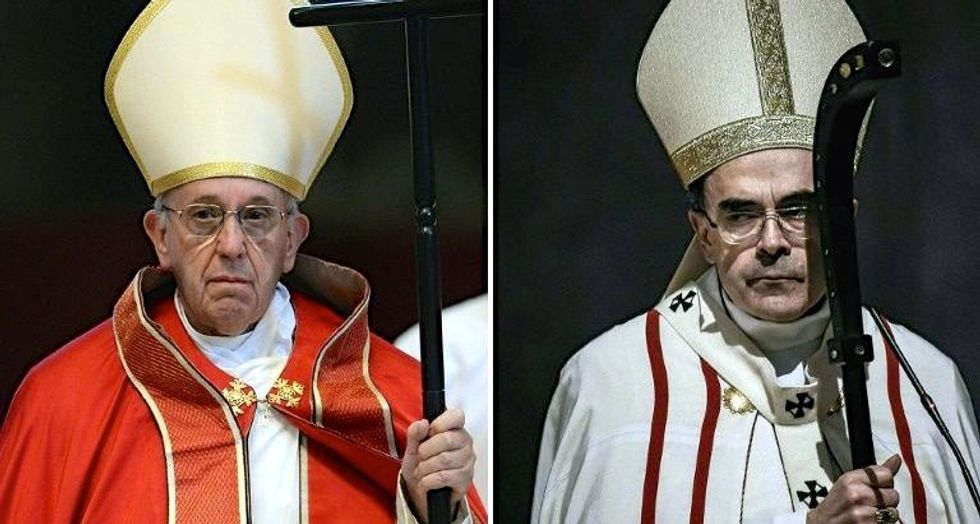 Pope Francis came under fire Friday after meeting Cardinal Philippe Barbarin, the Lyon archbishop suspected of covering up for a paedophile priest in a scandal that has rocked the Catholic Church in France.

"There was a meeting, nothing out of the ordinary," Vatican spokesman Federico Lombardi said, adding that he expected the two men had discussed the crisis in the French church, as well as regular business.

After meeting the pontiff, Barbarin said he would be staying in his post with Francis' blessing.

"If the law showed up a serious negligent behaviour in my mission then (resignation) would be a course of action to envisage," the archbishop told French daily Le Figaro.

"For the moment, that would not be responsible, it would indeed be contrary to my duty. You do not leave the ship at the height of the storm," said Barbarin, one of France's most senior clergymen.

He added that "not a single child" had "suffered from decisions that (he had) taken as a bishop" and said he would await "serenely" the outcome of investigations into whether he knew of wrongdoing and failed to blow the whistle.

A support group for the alleged victims in the French scandal voiced regret that Francis had met Barbarin while magistrates are still mulling whether the cardinal should face criminal charges.

"We would have liked to have been received instead of the cardinal, we note that once again it's the victims who are sidelined," Bertrand Virieux, a co-founder of Lyon-based group "La Parole Liberee", told AFP.

Virieux said he had written to the pope in March seeking an audience.

The surprise meeting with Barbarin came three days after the pope was quoted as saying it would be "nonsensical and imprudent" to seek the archbishop's resignation at this stage, arguing that would be to imply he was guilty of potential criminal charges against him.

French examining magistrates are currently carrying out two preliminary investigations to decide whether to pursue charges against the archbishop for his handling of the allegations against Bernard Preynat, a priest in his diocese who has been charged with sex abuse.

Preynat was charged in January after admitting sexual assaults on four boy scouts between 1986 and 1991 -- crimes which his lawyers say he can no longer be convicted of.

La Parole Liberee says it has identified more than 50 victims.

According to the Lyon diocese, Barbarin first received testimony from an alleged victim in mid-2014 and relieved Preynat of his duties in May 2015.

Francis said in an interview with French Catholic newspaper La Croix this week that he believed Barbarin had "taken the necessary measures", and had the situation in hand.

Victims groups reacted angrily, saying Francis could not possibly know all the details of a case they say highlights the reluctance of the Church to hand paedophile priests over to criminal authorities.

Virieux also expressed regret at Francis meeting the cardinal on the same day as an important court hearing in the charged priest's case.

Lyon's appeal court on Friday held a a pre-trial hearing on Preynat's appeal against an earlier ruling that the alleged abuse is no longer subject to prosecution on statute of limitations grounds.

Barbarin admitted last month to "errors in the management and nomination of certain priests," but vehemently denied any cover-up.

Pope Francis came to power promising a crackdown on cover-ups and a zero tolerance approach to abuse itself, which he famously described as being akin to taking part in a Satanic mass.

After decades of scandals that have badly damaged the Church's standing in many countries, victims complain they are still not being listened to, that bishops will not hand priests over to police and that a conspiracy of silence remains in place.

Francis had put in place legal structures enabling paedophile clerics to be tried by the Vatican's criminal court.