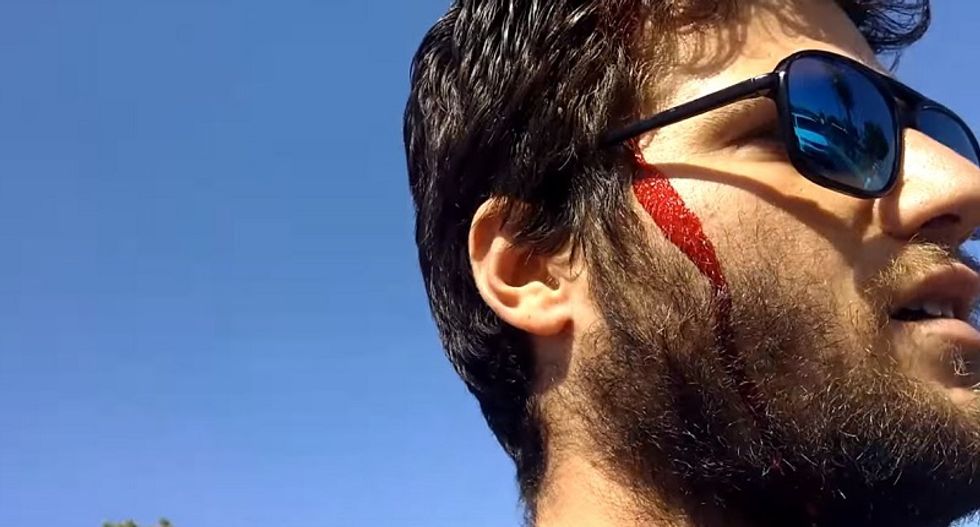 Street preacher Dean Saxton after being hit with bat (Screenshot/YouTube)

A street preacher who yells anti-gay messages got hit over the head by a student outraged by his offensive speech, ABC15 reports.

Glendale, Arizona preacher Brother Dean Saxton makes it a habit to stand outside local high schools and loudly condemn students and members of the LGBT community. ABC15 reports he often also holds a sign that reads, "You deserve to be raped."

But when he embarked on one of his unsolicited missions this month at Apollo High School, Tabitha Brubaker, 19, responded to what she called hate speech by striking him over the head with a baseball bat, according to authorities. She has been charged with felony assault. Police also charged her with marijuana possession.

Saxton posted a video of the incident on YouTube, in which he can be seen yelling his message outside the high school.

He is approached periodically by students and a teacher repudiating him. Saxton accuses the teacher of trying to influence the students, who he called "evil."

"I'm trying to influence the fact that you need to be gone," the teacher says. "I think you're a disgrace to Christianity. Why don't you go and preach it to somebody who really wants to hear your message, like Westboro Baptist Church?"

Another adult approaches Saxton and tells him to leave, saying he doesn't think Saxton was "playing with a full deck." He then says, "These kids don't need to see that," then reacts with shock when Saxton is hit over the head.

Saxton's camera is still rolling when he is hit, and some people standing around him seem to celebrate. Brubaker is out of frame, but she has been arrested for hitting Saxton.

Watch the report, from ABC15, here: