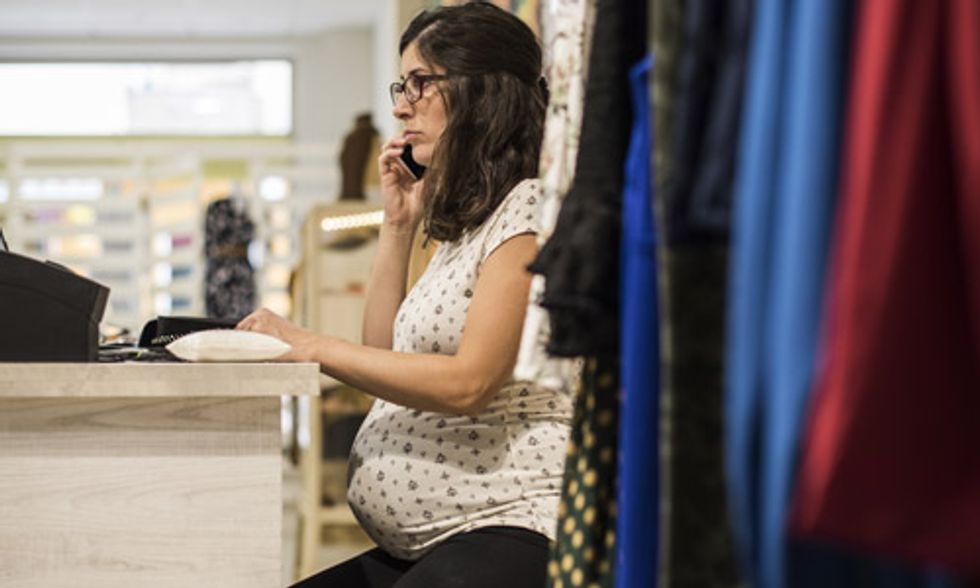 Procter & Gamble made women cry with its tear-bait Olympics ad last week; but now Think Progress reports that the company made a real life woman who was an employee cry -- after it canned her for being pregnant. Tiffany Kantrowitz alleges that the company terminated her employment in February, 2015, four months into her pregnancy. She has filed a lawsuit against the company.

Prior to her pregnancy, one of her supervisors had told her at the Dolce and Gabbana shop at Saks Fifth Avenue where she worked that "pregnancy is not part of the uniform." During the early weeks of her pregnancy, Kantrowitz began to experience some of the common side effects that come along with a first trimester: "extreme nausea, dizziness, severe fatigue, and chronic headaches." Despite this, Kantrowitz did not miss a day of work.

"One day when she felt faint," Think Progress reports, "she sat on a stool while attending to customers. Four days later, the complaint says, she got a written warning for it."

Kantrowitz went to human resources representatives with doctor's notes documenting her symptoms, and asking if they would work with her to accommodate her temporary state. New York state requires employers to make reasonable accommodations for pregnancy.

The company offered her a byzantine system of breaks on different floors of the building, but then made her deduct the time from the "12 weeks of Family and Medical Leave act she was saving for once her baby was born."

Kantrowitz continued working, even though some days, she had to lean on walls while on her way to the break room. She was terminated by the company on a charge that she had "[cosmetic] tester items" among her personal belongings -- a common practice among Dolce and Gabbana employees.

Talk to female teachers and professors who worked while pregnant a few decades ago, and it doesn't take long to collect stories of women fired from their jobs or told to take the year off, rather than expose a classroom to proof that a woman has had sex. In the case of P&G, the company is happy to earn revenues from the family of products that it markets to pregnant women and young mothers -- including Luvs diapers --  but in this case, it seems to have issues with the pregnant women who work for it.