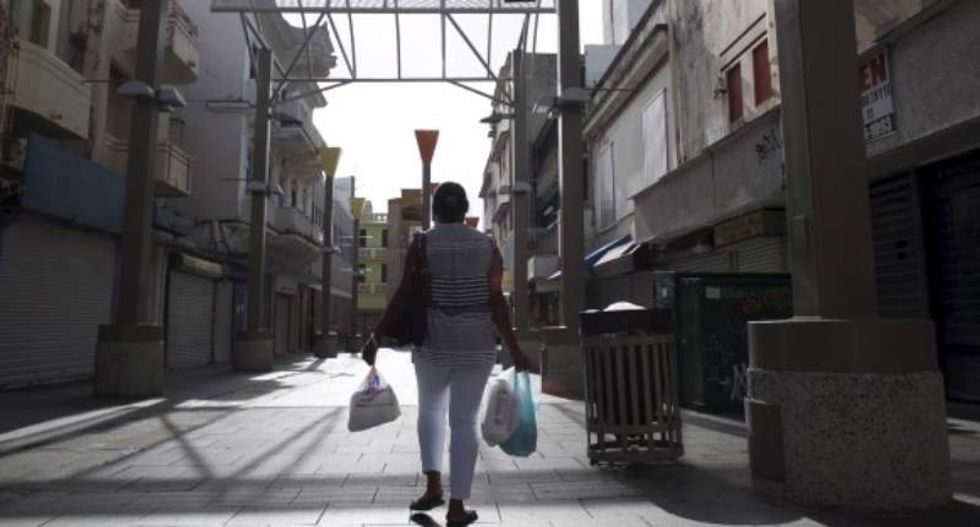 A woman carries bags while walking in a commercial area with stores either closed or offered for sale in San Juan, Puerto Rico, on July 31, 2015. (Reuters/Alvin Baez)

Puerto Rico's Government Development Bank, the main funding source for the U.S. commonwealth's public agencies, said it reached a tentative restructuring deal with some major creditors hours after declaring it would skip a $422 million debt payment.

The agreed framework is "a vital first step" that needs both restructuring legislation from the U.S. federal government and participation from all of the GDB’s creditors in order to work, the bank said in the statement issued late on Sunday.

Puerto Rico overall faces $70 billion in debt, a staggering 45-percent poverty rate and a shrinking population as it enters the most dire stretch of its fiscal crisis. It owes another $1.9 billion on July 1 that Governor Alejandro Garcia Padilla says it cannot pay.

Both the government and the creditors, who call themselves the Ad Hoc Group and hold roughly $935 million of the GDB's nearly $4 billion in bonds, said they would continue negotiations for another 30 days.

These creditors said in a statement on Monday they would not pursue legal action during that time, although that does not preclude smaller investors from filing lawsuits.

As a U.S. territory, Puerto Rico cannot file for bankruptcy protection. It has been pleading for Washington to offer it a lifeline.

The GDB default is the most significant yet in Puerto Rico, because the bank acts as the main depositary and liquidity source for public agencies like the island’s highway and infrastructure authorities.

The indicative terms of the deal reached with the Ad Hoc group is a two-step debt exchange where they would likely recoup about 47 percent of what they are owed.

Puerto Rico has reached forbearance or restructuring deals with firms holding about $153 million of the debt due on Monday, and has said it will pay another $22 million in interest. That leaves some $247 million that will be defaulted upon, mostly held by smaller investors without the organization or deep pockets of the ad hoc group.

One major investor, who requested anonymity while talks are under way, said there is discussion over reducing the need for 100 percent of creditors to agree to the terms.

"If we can get that down to 95 percent participation or so, we think we can get there, without any federal legislation," the investor said.

Sources involved in the talks told Reuters the Ad Hoc Group holds about $120 million of the debt due Monday.

A second investor whose firm manages more than $10 billion but is not involved in the talks, said they were holding their bonds to see how any deal would work and hoped rules overseeing bond agreements are not changed after the fact.

"I'm unlikely to buy again if they are not transparent and change the rules governing their debt after the fact," said the second investor, who requested anonymity because of the ongoing talks.

Multiple market sources said the GDB's 2011 Series B senior notes that are going unpaid are being quoted in the market at around 20 cents on the dollar.

In a televised speech on Sunday evening, Puerto Rico Governor Alejandro Garcia Padilla imposed a moratorium on the debt payment, a "painful" decision he blamed on the absence of U.S. Congressional action to solve Puerto Rico's debt crisis.

Puerto Rico owes another $1.9 billion on July 1 that Garcia Padilla has said it cannot pay.

Congress is debating a bill that would put the island’s finances under federal oversight and allow it to restructure debt in a bankruptcy-like process, but the bill has faced criticism from conservative and liberal wings of both parties.

Pedro Pierluisi, the island's representative in Congress, spread the blame.

"Puerto Rico is in this situation for two reasons: profound inequality at the federal level and profound mismanagement at the local level," he said in a statement on Monday.