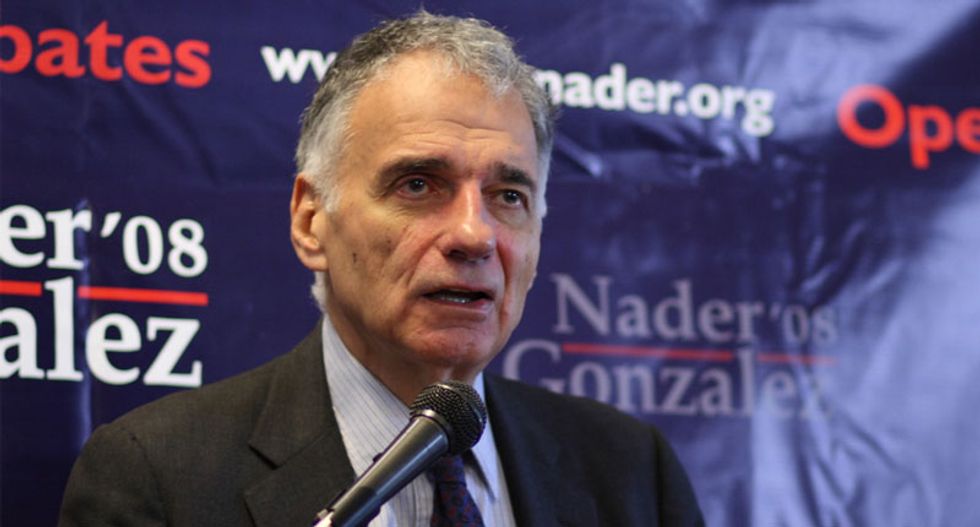 Former presidential candidate Ralph Nader is running for a position on Harvard University's board of overseers, Politico reported.

Nader is campaigning as part of the Free Harvard, Fair Harvard slate of candidates calling for the school to both stop charging tuition and increase transparency in the school's admissions process.

"A nation that selects its elites by corrupt means will produce corrupt elites," the campaign website states. "There is also strong evidence that Harvard has a system of 'Asian Quotas' just like the 'Jewish Quotas' of the 1920s. Racial discrimination against Asian-American students has no place at Harvard University."

"I'm only signing on for disclosure. In terms of any other stuff, they're on their own," he said of his role in the campaign. "I've always been against 250 years of affirmative action for white males."

Nader said that Ivy League schools like Harvard reinforce "legacy" admissions covering children of alumni because of the lack of transparency in their admissions process.

"I've long suspected that while the Ivy League brags it doesn't have athletic scholarships, what it does is weigh very heavily varsity performance in secondary school as a factor in admissions," he said. "If you get in as a squash player at Hotchkiss or Andover, what color do you think you are? In what black neighborhood is there a squash court?"

At the same time, however, Nader rejected what he described as "identity politics."

"This identity politics is an implosion phenomenon. It gets more and more bitter over less and less," he said. "At one time there were very serious situations where students were getting beat up in the South and getting excluded per se from Harvard. Those were really serious discriminatory practices.”

According to Politico, the campaign is led by Ron Unz, a graduate of the university and a libertarian who has lent financial support to what he calls "alternative" thinkers from both the political left and right.

"I stand by my own articles. I don't stand by everything that gets published by people I support," said Unz, who is also running as a Republican candidate to succeed Rep. Barbara Boxer (D-CA). "I've given money to Bernie Sanders. I don't agree with Bernie Sanders on everything."

Unz has also supported VDARE, which has described by the Southern Poverty Law Center (SPLC) as an "anti-immigration hate website." Unz has called VDARE "quasi-white nationalist" in nature.

Asked about his work with Unz, Nader described him as "a very nuanced guy."

"He should not be stereotyped as a lot of the world of identity politics does," said Nader, who ran for the presidency four times, including twice as the Green Party nominee.

The group has already drawn opposition from an alumni organization, the Coalition for a Diverse Harvard.

"In recent times, Ralph Nader has been writing and acting in alliance with some of what I would call more right-wing organizations and individuals and I believe he may think that advances causes he is interested in," said coalition member Michael Williams. "But in the case of the Harvard overseer election [he’s] aligning with other slate members who have conservative principles and may take Harvard backwards, reducing the diversity of the school."