Refugee sets herself on fire at Australia's Nauru camp 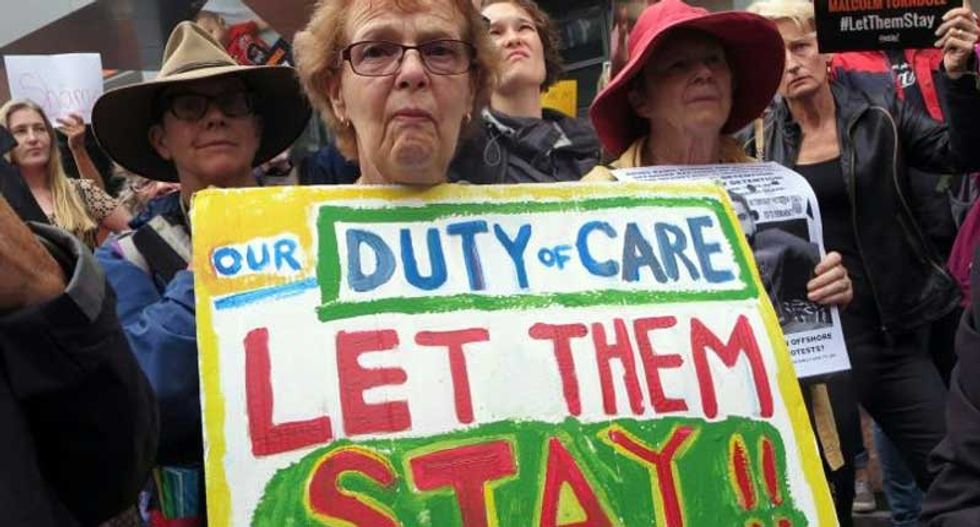 People protest outside an immigration office in Sydney (AFP)

A refugee who set herself on fire on the Pacific island of Nauru after being sent there by Australia was in a critical condition Tuesday, just days after an Iranian man died in a similar act of self-harm.

Australian Immigration Minister Peter Dutton said the incident happened on Monday and the behaviour of those detained on the small island -- where Australia sends asylum-seekers arriving by boat -- was intensifying.

But he stressed that "no action... will cause the government to deviate from its course".

"We are not going to allow people to drown at sea again," Dutton told reporters in Canberra.

Dutton blamed refugee advocates for encouraging those in detention centres "to engage in behaviours they believe will pressure the government to bring them to Australia".

"These behaviours have intensified in recent times, and as we see, have now turned to extreme acts with terrible consequences," he said.

Under a much-criticised policy, Canberra sends all asylum-seekers arriving by sea to camps on Nauru and Papua New Guinea and denies them resettlement in Australia even if they are found to be genuine refugees.

The government argues that the tough approach -- which also includes turning back boats -- has prevented drownings by stopping people making the dangerous journey, often from Indonesia.

The policy has seen the number of boats dwindle, but the government still has hundreds of refugees and asylum-seekers living in the Pacific centres.

Dutton said after the "distressing" incident, reportedly involving a 21-year-old Somali, the woman had been transferred to hospital in Australia.

"She remains in a critical condition and all efforts are being made to meet her medical needs. We can only hope for the best possible outcome," the minister said in a statement.

"It is of grave concern that this person would resort to such an extreme act of self-harm."

Last week, a 23-year-old Iranian man known as Omid set fire to himself on Nauru during a visit by United Nations representatives, an act the Nauru government said was a "political protest".

He was airlifted to Australia with severe burns, but died on Friday.

Under Australia's policy, those found to be refugees can be settled on Papua New Guinea or Cambodia, with Nauru already home to some 700 refugees, Dutton said. Asylum-seekers can also choose to return to their home country.

Papua New Guinea's Supreme Court last week found its centre on Manus Island -- which has some 850 detainees -- to be unconstitutional, prompting the government in Port Moresby to order it closed.