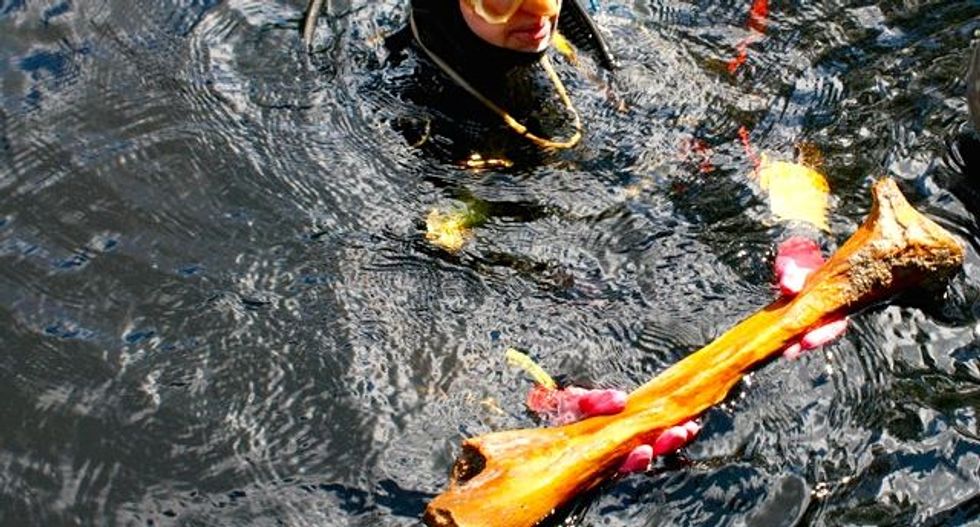 Neil Puckett, a Ph.D. student from Texas A&M University involved in the excavations, surfaces with the limb bone of a juvenile mastodon at a sinkhole in limestone bedrock at the so-called Page-Ladson site near Tallahassee, Florida, United States in this image released May 13, 2016. Courtesy Brendan Fenerty/Handout via REUTERS

Researchers who dove hundreds of times into a sinkhole beneath the brown murky waters of Florida's Aucilla River have retrieved some of the oldest evidence of human presence in the Americas including stone tools apparently used to butcher a mastodon.

Scientists said on Friday the tools, animal bones and mastodon tusk found at the site showed that people already had occupied the American Southeast by 14,550 years ago, about 1,500 years earlier than previously known.

The site provided some of the most compelling evidence that humans had spread across the New World earlier than the so-called Clovis people, who archeologists for six decades considered the Americas' first people. The Clovis people, recognized for their distinctive spearheads, are known from archeological evidence about 13,000 years old.

The artifacts painted a picture of human hunter-gatherers butchering or scavenging a mastodon, an extinct elephant cousin, next to a small inland pond. The tusk had cut marks from a tool used to remove it from the skull, perhaps to access edible tissue at its base.

Intrigued by previous archeological finds at the site, the researchers conducted 890 dives into the 35-foot-deep (11-meter) sinkhole in limestone bedrock at the so-called Page-Ladson site near Florida's capital Tallahassee from 2012 to 2014.

They excavated stone tools including a biface, a stone knife useful for butchering animals, and bones of extinct big mammals including camels, bison, horses and mastodons.

Florida State University anthropologist Jessi Halligan, who dove 126 times, said nomadic hunter-gatherers may have followed big prey like mastodons from water hole to water hole. Bones that appear to be from dogs suggest the hunter-gatherers had canine companions with them.

There were no humans in the Americas until people crossed the land bridge that once connected Siberia to Alaska during the Ice Age but the timing of that event remains mysterious.

"The evidence from the Page-Ladson site is a major leap forward in shaping a new view of the peopling of the Americas at the end of the last Ice Age," Texas A&M University archeologist Michael Waters said.

"In the archeological community, there's still a terrific amount of resistance to the idea that people were here before Clovis."

Only a handful of pre-Clovis sites are known in the Americas. There is controversy about the legitimacy of some of them. The Florida site is roughly the same age as one in Chile that is considered the most scientifically accepted pre-Clovis locale.