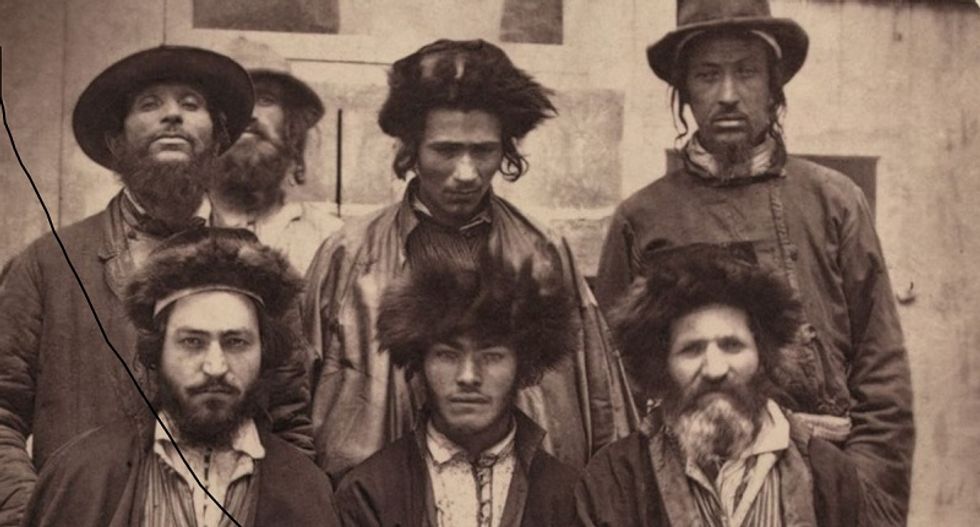 At 1,000 years, the search for the location of Ashkenaz – thought to be the birthplace of Ashkanazic Jews and the Yiddish language – is one of the longest quests in human history. It is perhaps second only in length to the search for Noah’s Ark which began in the 3rd century AD.

The place name Ashkenaz occurs three times in the Bible, but by the Middle Ages the exact origin of Ashkenaz was forgotten. Because of the migration of the Ashkenazic Jews it later became associated with Germany. This led to all German Jews being considered “Ashkenazic”, a term which was then applied to central and eastern European Jews who follow Ashkenazic religious customs and who speak Yiddish.

The Yiddish language – which consists of Hebrew, German, Slavic elements and is written in Aramaic – has been spoken at least since the 9th century AD, but its origins have been debated by linguists for several centuries. While some have suggested a German origin, others believe a more complex beginning for the language, starting in Slavic lands in Khazaria – the Middle Age Khazar Empire that covered present-day southern Russia, Kazakhstan, Ukraine, and parts of the Caucasus – and followed by Ukraine, and finally Germany. Although the language adopted a German vocabulary it retained its Slavic grammar – which is why Yiddish is often referred to as “bad German”.

The inability of linguists to reach a consensus have led some to decry that the mystery of where Yiddish came from will never be solved. But now for the first time a pioneering tool that converts genome data into ancestral coordinates, is helping to pinpoint the DNA of Yiddish speakers.

In the largest genomic study of Ashkenazic Jews, and the first one to study Yiddish speakers, we applied our Geographic Population Structure (GPS) tool – which operates in a similar way to the sat nav in your car – to the genomes of more than 360 Yiddish and non-Yiddish speaking Ashkenazic Jews.

DNA of Yiddish speakers could have originated from four ancient villages in north-west Turkey.

Surprisingly, our GPS honed in on north-east Turkey, where we found four primeval villages, one of which was abandoned in the mid-7th century AD.

These ancient villages identified by the GPS tool are clustered close to the Silk Road – the ancient network of trade routes – and are named Iskenaz, Eskenaz, Ashanaz, and Ashkuz. And it is likely that these are the villages that mark the location of the lost lands of Ashkenaz.

The history of a people

Located on the cross roads of ancient trade routes, this region suggests that the Yiddish language was developed by Iranian and Ashkenazic Jews as they traded on the Silk Road from the first centuries AD to around the 9th century when they arrived in Slavic lands.

Putting together evidence from linguistic, history, and genetics, we concluded that the ancient Ashkenazic Jews were merchants who developed Yiddish as a secret language – with 251 words for “buy” and “sell” – to maintain their monopoly. They were known to trade in everything from fur to slaves.

By the 8th century the words “Jew” and “merchant” were practically synonymous, and it was around this time that Ashkenazic Jews began relocating from ancient Ashkenaz to the Khazar Empire to expand their mercantile operations.

This Jewish migration led to some of the Turkic Khazar rulers and numerous eastern Slavs living within the Khazar Empire to convert to Judaism so they didn’t miss out on the lucrative Silk Road trade between Germany and China.

But the demise of Khazaria due to continued invasions and finally the Black Death devastated this last Jewish Empire of Khazaria. This led to the Ashkenazic Jews splitting into two groups – some remaining in the Caucasus and others migrating into eastern Europe and Germany.

The two groups still called themselves Ashkenazic Jews, however the name Ashkenaz became more strongly associated with Germany and the the European group – for whom Yiddish became their primary language.

Since north-east Turkey is the only place in the world where the place names of Iskenaz, Eskenaz, Ashanaz, and Ashkuz exist this strongly implies that Yiddish was established around the first millennium at a time when Jewish traders moved goods from Asia to Europe. This was done by developing the language of Yiddish, which very few can speak or understand other than Jews.

Further evidence to the origin of Ashkenazic Jews can be found in many customs – such as the breaking of a glass at a wedding ceremony and placing stones over tombstones, which were probably introduced by Slavic converts to Judaism.

By studying the origin of Yiddish using our GPS technology, combined with a citizen science approach, we were able to shed light on one of the most forgotten chapters of history and demonstrate the use of bio-geographical genetic tools to study the origin of languages. For Ashkanazic Jews these are the ties that bind their history, culture, behaviour, and identity.