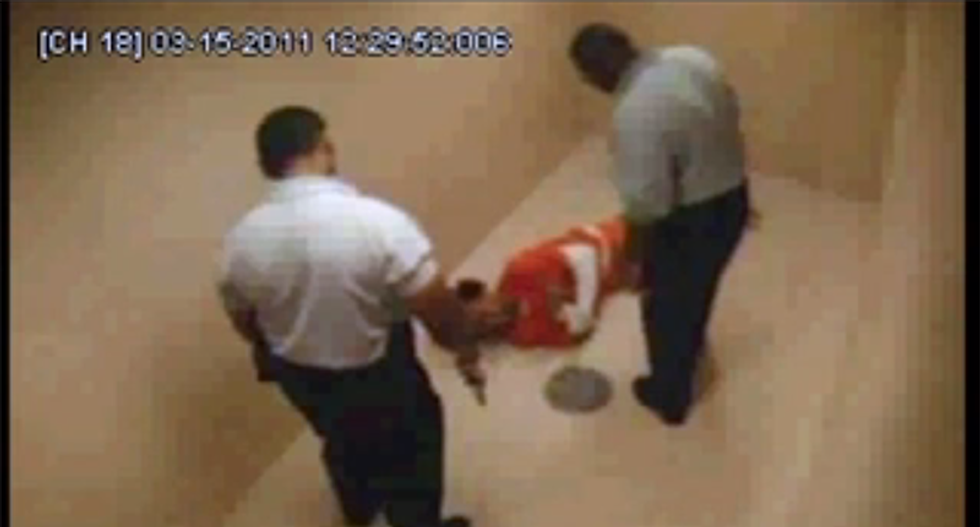 The News Observer in North Carolina has filed a shocking and disturbing expose into the five-year cover-up by local deputies who tasered a mentally ill man to death.

Brandon Bethea was 24-years-old when Harnett County detention officers followed him into a padded cell and shot him in the chest with a taser. Bethea fell to the ground, still in leg shackles, as the officer pulled the trigger twice more jolting him with electricity. They left the cell, waiting 20 minutes to check if he was alive. He couldn't be revived.

All of this was captured on the video below. But the deputy responsible remains an employee of the county jail, no charges have been filed and his boss -- who helped cover up the homicide -- ran unopposed in his last election. Republican Sheriff Larry Rollins even lied to reporters, claiming that the death was unavoidable.

The incident report later filed by the detective in charge of the case continued the cover-up. Saying, “During the altercation, Detention Officer John Clark deployed an electronic control device (Taser X26) in an attempt to gain control of Bethea and restrain him. Bethea was struck in the upper body with probes from the electronic control device at which time he complied and was restrained by Detention Officers,” the report reads. “...Bethea was conscious and alert at the time officers left him.”

Detective M.J. Toler swore the officer was injured during the incident and taken to the hospital. It was all a lie. Bethea was shocked because he was told to roll over but was incapacitated and couldn't. Bethea was far from alert when officers left. According to the video, his arm moved a little and after two minutes he never moved again.

The medical examiner who did the autopsy even ruled the death a homicide. SBI agents were sent to investigate, but the full report that was sent to District Attorney Vernon Stewart is confidential under state law. Stewart refuses to release it to the public.

State inspectors from the Department of Health and Human Services were also sent in to investigate as part of a broader report on jail deaths. “Staff must recognize the difference between taking control of an inmate and changing the behavior of an inmate,” their report reads regarding Rollins' actions. They too recognized that Bethea's death was as a result of excessive force and could have been avoided.

Understandably, the family sued the county for the death and they quickly settled the case for $350,000. The last thing they needed was to go through a lengthy discovery phase where there was a chance the SBI report could become public. A federal judge approved a protective order to keep the records sealed.

Even after the release of the video, District Attorney Stewart refuses to pursue the case.

Sheriff Rollins voluntarily resigned last month, two years before his term was to expire and he refuses to speak to the news on the incident.

Detention Officer John Clark remains armed and on duty. Over the last 5 years since the murder his pay has increased 20 percent, according to county records.

This is just one of several cases uncovered by the News Observer. Deputy Nicholas Kehagias didn't have a search warrant to enter a home or arrest warrant to serve but that didn't stop him from barging in and arresting John Livingston. The officer shot Livingston with a taser and when the officer dropped it and Livingston reached for it, the officer shot him three times. He was dead before paramedics arrived.

That isn't the first or the last time Deputy Kehagias has exhibited problematic behavior. "More than a dozen people describe incidents of abuse or harassment by Deputy Nicholas Kehagias or a few other deputies on D squad; several complained to authorities," the report details. Still, no actions have been taken.