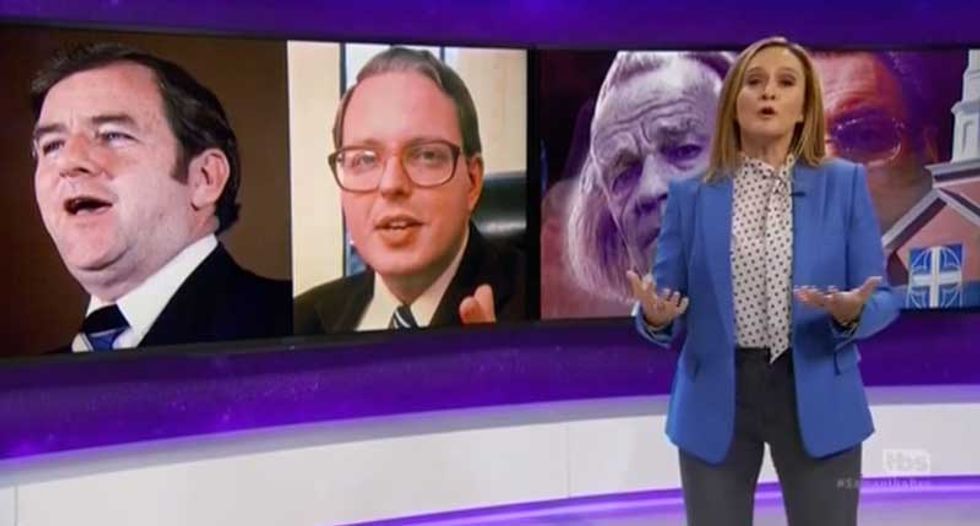 In Monday night's episode of Full Frontal, host Samantha Bee continued her history lesson on the evangelical religious right -- and their symbiotic relationship with the Republican Party.

"Last week, we took a look at the religious right -- those coveted evangelical voters that conservatives spent decades pandering to only to be dumped just before November prom for a heretical billionaire bully who only says the word "God" when he is ejaculating on a pile of money," Bee began.

"Many people think the new religious right arose as a response to the 1973 Roe v. Wade decision. But that's not true"

Religious studies professor Randall Balmer explained that  leaders like Jerry Falwell and Paul Wirke were looking for ways to extend their power in the American political process, following the founding of the Moral Majority in 1979.

Balmer explained, "They held a conference call to discuss the prospect of other political activities. Several people discussed possible issues and finally a voice on the end of one of the lines said, 'How about abortion?'"

Bee then interviewed author and filmmaker Frank Schaeffer, who claimed to be instrumental in the founding of the modern anti-abortion movement.

"One of the things that I did back in the day when I was young was help found, start, begin what became known as the 'pro-life movement.' It is the single greatest regret of my life. We made a film series called 'Whatever Happened to the Human Race' featuring my dad -- Francis Schaeffer -- and Dr. C. Everett Coop," Schaeffer said.

Schaeffer then explained how the GOP got involved in making the Moral Majority's new anti-abortion agenda legitimate.

"One of the people who helped us do that was Jack Kemp. He brought in 50 senators and congressmen including Henry Hyde and Bob Dole and a bunch of other people and gave it respectability."