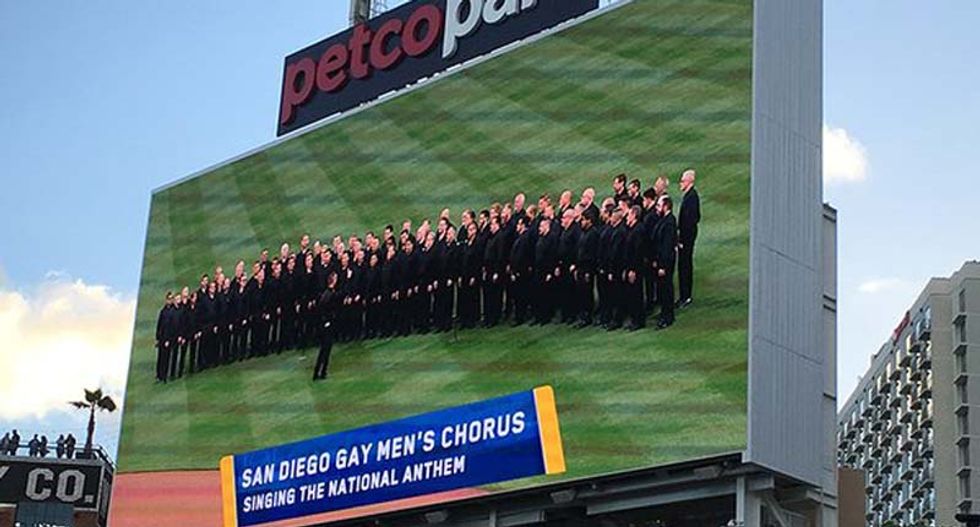 The president of San Diego's major league baseball team has apologized to the San Diego Gay Men's Chorus after plans for them to sing the National Anthem went awry Saturday night, causing them to be booed off the field.

According to the Union-Tribune, the 100-member chorus was invited to open the game as part of an LBGT event called “Out at the Park.”

Things quickly fell apart after the control room accidentally played audio of a woman -- believed to have been recorded the night before -- singing the anthem as the numbed men stood on the field.

As the men walked off the field without performing, they were booed and taunted by fans, with one spectator yelling at them "You sing like a girl."

The Padres quickly apologized while the game was still in progress, posting a statement to their Twitter account reading, in part: "A mistake was made in the Petco Park control room that prevented the San Diego Gay Men's Chorus from performing the National Anthem as scheduled."

"We apologize to anyone in the park who was offended, and have reached out to the Chorus to express our deep regret for the error."

On the SD Gay Chorus Facebook page, the group responded by thanking the team for the apology, but criticized how it was handled on the field.

"No attempt to correct the situation occurred other than to force the 100 men to stand in the spotlight of center field for the song’s duration and then be escorted off the field to the heckles of baseball fans shouting homophobic taunts including 'You sing like a girl,'" the statement read.

The group also criticized the major league team over a dispute leading up to the game, saying the Padres insisted that members of the chorus pay for tickets to the game despite asking them to provide entertainment.

According to the group, the Padres only relented after San Diego Pride became involved.

Watch video of the chorus standing on the field as the tape played below: