Sanders lashes out at CNN's Jake Tapper: 'People who come to my rallies can do arithmetic' 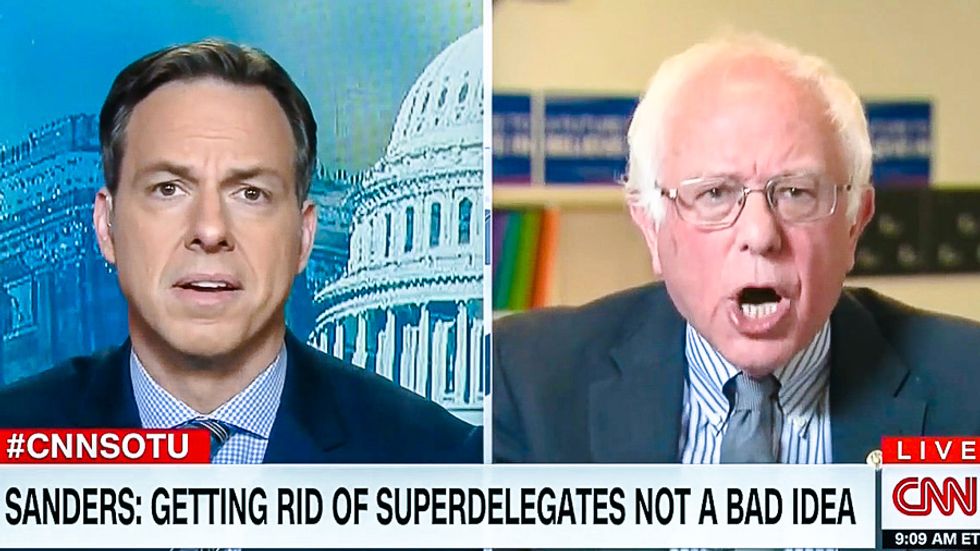 Democratic presidential candidate Bernie Sanders argued on Sunday that he was the better choice for the party's nomination even though he had received fewer votes that Hillary Clinton.

CNN host Jake Tapper asked the candidate over the weekend if he was misleading his supporters by downplaying the fact that Clinton has "roughly 54 percent" of the pledged delegates.

"It seems unlikely that you'll actually achieve the majority of the pledged delegates," Tapper noted.

"I assume that most of the people who come to my rallies can do arithmetic," the candidate quipped. "If I have 46 percent, she has 54 percent. The point that I was making is there's something absurd when I get 46 percent of the delegates that come from real contests -- real elections, and 7 percent of the super delegates."

"I am the stronger candidate because we appeal to independents, people who are not in love with either the Democratic or the Republican Party," Sanders insisted.

Tapper observed that the Sanders campaign's goal was to "secure a majority of the pledged delegates."

"Should we assume that means that you believe the candidate who has the majority of pledged delegates by the end of this process should be the nominee?" the CNN host wondered.

"I understand that it's an uphill fight to go from 46 percent where we are today to 50 percent in the nine remaining contests, I got that," Sanders admitted, adding that super delegates should take an "objective look at which candidate is stronger."

Tapper, however, explained that Clinton "has more votes than you and she has more pledged delegates than you."

"The question is just a simple, yes or no," Tapper said. "Should the person with the most pledged delegates be the Democratic nominee?"

"I'm not a fan of super delegates, but their job is to take an objective look at reality," Sanders opined. "So, we'll see what happens."

"We are where we are right now!" the candidate continued, raising his voice. "And where we are is we are fighting to win the pledged delegates. So before I can answer your question, let's see what's going to happen."

"Let me also say this," Sanders remarked. "In all due respect to the current chairperson, if elected president, she would not be reappointed to be chair of the DNC."