Seth Meyers nails flip-flopper Trump as a 'Magic 8-ball' candidate: Shake him for a different answer 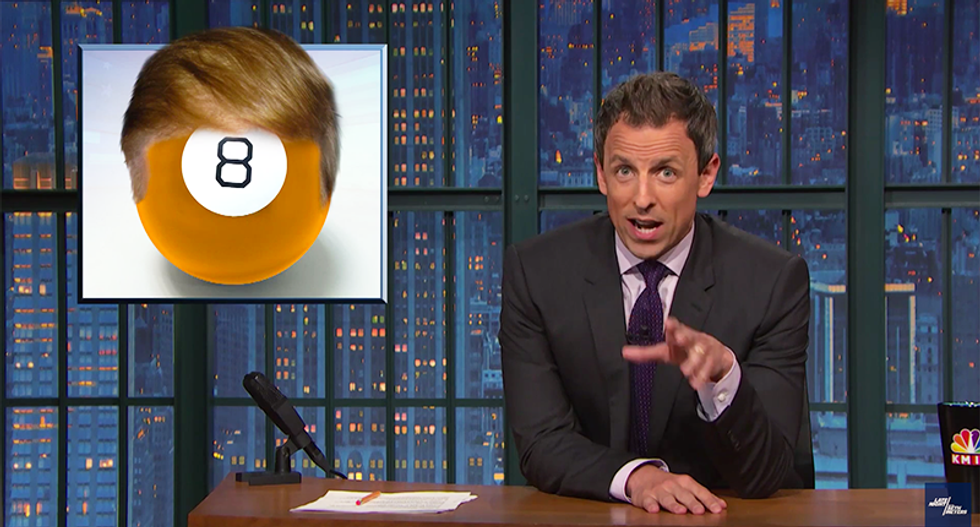 "So if you're watching Mr. Trump, congratulations," Meyers said. "You did it! You are a big boy who did a big boy thing, and we are so, so f*cking proud of you."

But then Meyers knocked Trump down another peg by calling out every, single incident of flip-flopping Trump has done. "In some ways, Trump reversing himself as soon as he wraps up the nomination might be the least surprising development of the campaign."

While most candidates move to the center for a general election, Meyers says most people are also quieter while they're doing it. Remember that time Mitt Romney's campaign advisor got compared to an Etch-A-Sketch in 2012?

"And that hurt Romney, because gaffes use to hurt politicians," Meyers said remembering the good old days. "But unlike Romney, Trump is no Etch-A-Sketch. Trump is a Magic 8 Ball. You shake it up and you can get one answer, shake it again, you get something completely different." Everything from his stance on the minimum wage, to tax cuts for the wealthy, to self-funding his campaign, letting the states decide while erasing borders while building a wall. A person can get lost from all of the twists and turns. Even George Stephanopoulos got a different answer from Trump on the tax increase for the wealthy.

"Now, these flip-flops are unlikely to upset many Trump supporters, but there is one thing about Trump's campaign they do seem to care very much about — self-funding," Meyers said before showing a collection of Trump saying that when candidates take "that money" from special interests they "own you." But that was before Trump hired a former Goldman Sachs partner "to appeal to the very same GOP donors Trump dissed," Meyers said.

"But if anyone seems willing to accept Trump's sudden change of heart, it's the GOP establishment," Meyers continued, addressing the recent surge in support from current and former Republican leaders. He then showed a hilarious clip of former Gov. Bobby Jindal (R-LA), Sen. Rand Paul (R-KY), Rep. Peter King (R-NY) and former Gov. Rick Perry (R-TX) all trashing the GOP nominee before he became the GOP nominee. Then he contrasted them with the same people saying something totally different about their support for Trump.

Trump is going to fit in just fine with these people.