Seth Meyers shreds Detroit’s shady school system: You have to pay your teachers for teaching 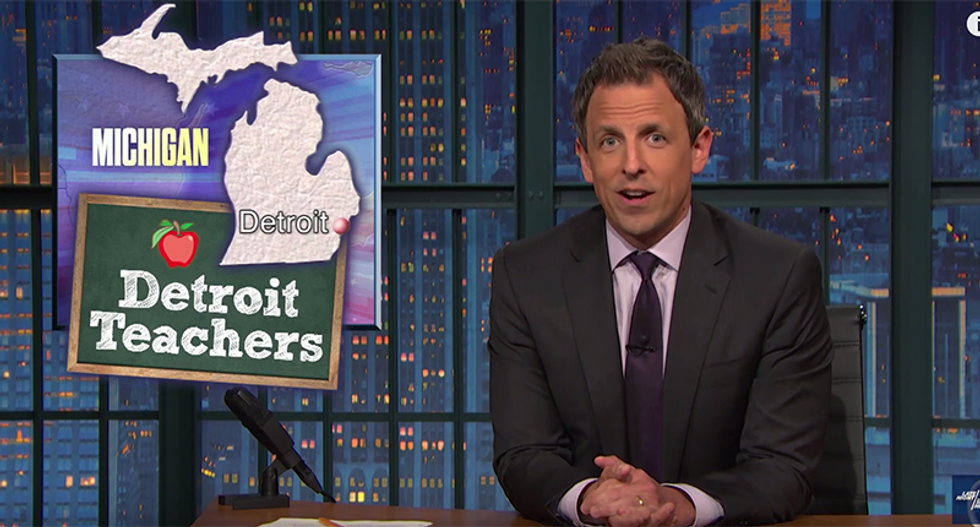 Detroit teachers are getting royally screwed, and Seth Meyers won't stand for it. Like the Flint water crisis, Detroit's schools have come under the rule of Gov. Rick Snyder's emergency manager that was appointed by the state. Not long after that, $30 million disappeared.

That's why teachers are staging a "sick-in," meaning they all called in sick to protest the fact that they won't be getting paid for the months they already worked. This isn't even the first time they have walked out. Teachers in Detroit protested building code violations that make it either unhealthy or dangerous for students. In one school the playground and the gym are both closed. When asked how he even teaches gym class, the teacher says the kids run up and down the halls.

"We've already worked and earned this money, and it's gone," Meyers showed one teacher saying about the disappearing budget.

"We shouldn't be forcing people to work for free!" Meyers agreed. "They're not college basketball players. But this illustrates a broader problem about how we think about education in this country. We often expect teachers to work for less and in worse conditions than we would expect for ourselves. We think of teachers almost like volunteers!"

Meyers concedes that many teachers do what they do because they love it and are committed to educating children, "but they should also be able to make a decent salary doing it." Or, you know, one at all.

Some states haven't given school teachers a raise in years. So, if you factor in inflation it has their salary actually falling. North Carolina, Indiana and Michigan are all the worst states in the country with teacher salaries falling 13.3 percent, 13.7 percent and 8.4 percent respectably. The only other people whose salaries have fallen more than that in the last 20 years are people like MySpace executives, POG developers and people who specialize in "The Rachel" haircut, Meyers said.

The average teacher has a bachelor's degrees and ten years of experience yet the salary is less than an auto-repair worker. This forces some to even work outside of class at a second job just to make ends meet. Yet, when teachers stand up and demand more they're shut down, and so-called "tough love" politicians like Chris Christie are heralded for telling them no.

When a charter school in New York tried out an experiment to pay teachers an substantial salary, test scores were significantly better. In fact, after just four years at the school, "students learned as much math as they would have learning 5.6 years elsewhere."

"The point is this," Meyers closed. "Teachers should be paid more. But even if we can't do that, let's agree that we should pay them for the work they've already done."

Check out the smackdown below: