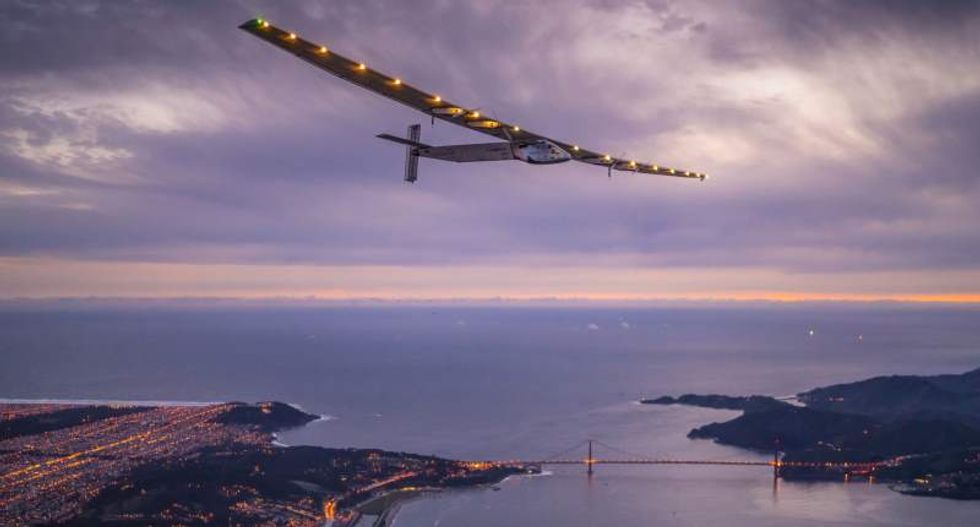 A solar-powered airplane midway through an attempt to circle the globe began the next leg of its history-making journey on Monday, departing northern California on a relatively short 16-hour flight to Arizona, the project team said.

The spindly, single-seat experimental aircraft dubbed Solar Impulse 2 took off just after 5 a.m. local time from San Francisco on a flight that will take it over the Mojave Desert before its planned arrival in Phoenix shortly before 9:30 p.m.

The lengthy duration of Monday's flight, which an airliner would make in just two hours, stems from a cruising speed more akin to that of a car, requiring pilots to practice meditation and hypnosis in training to stay alert for long hours.

Occupying the plane's tiny cockpit for the trip was Swiss aviator Andre Borschberg, a co-founder of the project. He and fellow pilot Bertrand Piccard, also of Switzerland, take turns at the controls for each segment of what they hope will be the first round-the-world solar-powered flight.

Borschberg was the pilot for the Japan-to-Hawaii trip over the Pacific last July, during which he remained airborne for nearly 118 hours, or five days and five nights.

That shattered the 76-hour world duration record for a non-stop, solo flight set in 2006 by the late American adventurer Steve Fossett in his Virgin Atlantic Global Flyer. It also set new duration and distance records for solar-powered flight.The feat, however, dealt a setback to the Solar Impulse team. The plane sustained severe battery damage on the flight from Japan, requiring repairs and testing that kept the aircraft grounded in Hawaii for nine months.

Piccard completed the trans-Pacific crossing last month, reaching San Francisco after a flight of nearly three days, more than three times longer than the 18 hours it took Amelia Earhart to fly solo from Hawaii to California in the 1930s.

The biggest difference is that the Solar Impulse flies without a drop of fuel. The four engines of the propeller-driven aircraft are powered solely by energy collected from more than 17,000 solar cells built into its wings.

Surplus power is stored in four batteries during daylight hours to keep the plane flying overnight, allowing it to remain aloft around the clock on extreme long-distance flights.

The carbon-fiber plane, with a wingspan exceeding that of a Boeing 747 and the weight of a family car, is unlikely to set any speed or altitude records. It can climb gradually to 28,000 feet (8,500 meters) and its cruising speed ranges from 34 to 62 miles per hour (55 to 100 kmh).

The Swiss team hopes eventually to complete its circumnavigation in Abu Dhabi, where its journey began in March 2015 as part of campaign to bolster support for clean energy technologies.

In a precursor to their globe-circling quest, the two men completed a multi-flight crossing of the United States with an earlier version of the solar plane in 2013.