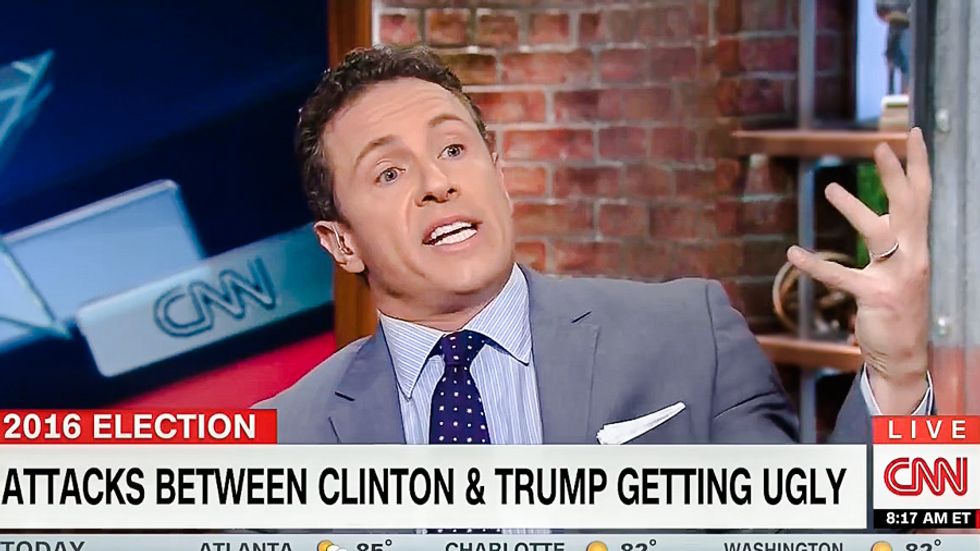 In a contentious interview on Tuesday, CNN's Chris Cuomo exposed Donald Trump's attacks on Hillary Clinton's marriage as disingenuous opportunism that will make 2016 the worst election in American history.

Michael Cohen, a surrogate and lawyer for Trump, told Cuomo that the billionaire candidate was running ads suggesting Bill Clinton was a rapist because Hillary Clinton was painting Trump as a "sexist misogynist."

"In fact, the women seem to be turning against Hillary Clinton for being the enabler-in-chief," Cohen said.

"If you are not a sexist," Cuomo observed, "what you usually say is 'I'm not a sexist, here's all the things that prove that I'm not.'"

"You don't turn around and say, 'You're the sexist. You call me a sexist, I call you a sexist,'" Cuomo continued. "Seems juvenile."

The CNN host noted that Trump had "defended Bill Clinton for years."

"He said the same allegations that you guys are talking about now were a waste of time, were wrong, were hollow, that Bill Clinton was a terrific guy, that he was a great president, that the impeachment was wrong, that it was a waste of time," Cuomo charged.

"All he's doing is he's giving the facts," Cohen retorted.

"No, no, no," Cuomo interrupted. "He knew the facts then in the 90s when this was all happening. He said it was all B.S."

But according to Cohen, Trump defended Clinton at the time because "he was trying to protect a friend. Now, it's a different game."

"Come on!" Cuomo shot back. "Michael, please. So he was lying then?"

"The difference is he was being a true friend," the Trump surrogate insisted.

"He would be friends with a guy that he thought was a piece of crap?" Cuomo wondered, adding that Trump had called Clinton's alleged mistresses and attackers "losers" and "evil."

"Why would I trust you if you say all the things you said then were false," the CNN host pressed. "So you tell the truth when you are a politician, but you lie when you are a private citizen?"

"You'll have to ask him," Cohen conceded, unable to respond to barrage of facts.

"That is a nice dodge," Cuomo quipped. "What I'm saying is that's the hypocrisy part. You defended the guy more than anybody else, basically, who didn't have to. And now, you're brining all the same attacks and saying it's different now, I'm running for office."