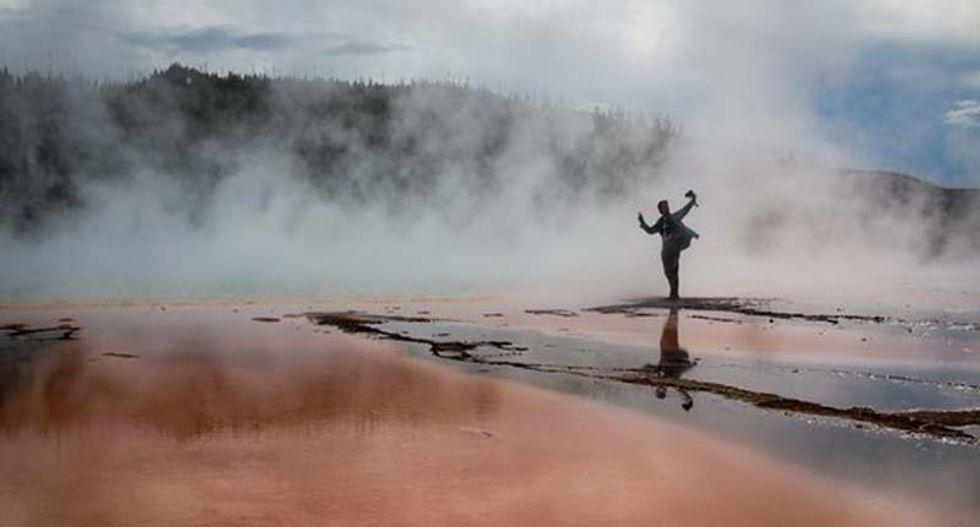 Rangers from the National Park Service have opened up an investigation into four online filmmakers who wandered out onto Yellowstone Park's pristine Grand Prismatic Spring in order to shoot video for a clothing company.

According to the Bozeman Daily Chronicle, a local resident of Jackson, Wyoming shot videos and photos of the four men strolling out onto the flats with video equipment before posing for the cameras. The local -- who wished to remain anonymous -- turned the evidence over to the rangers who stated that visitors are warned to stay on the paths and that signs are clearly posted.

The Grand Prismatic Spring is the largest hot spring in the U.S. -- known for it's colorful rings that match the optical prism (see below).

A search online identified the culprits as Alexey Lyakh, Ryker Gamble, Justis Cooper and Parker Heuser -- all of them connected to High on Life, a Canadian clothing seller of the same name. The men posted pictures of themselves on Instagram and included video of their sojourn out onto the hot spring on YouTube -- which has since been made private.

After being criticized online, the men published an apology on Facebook Tuesday morning, stating: "We got over zealous in our enthusiasm for this wonderful place. When standing at the face of such natural wonder, we were drawn to it. In an attempt to get the perfect shot, we acted in a way that doesn’t reflect our respect for the environment we were trying to capture. It was the wrong decision to make. We realize that now. We wandered off the laid out path and took photos of the Grand Prismatic Springs, unaware of the ecological ramifications and safety precautions. For this we would like to sincerely apologize to the Yellowstone park community and the public."

Yellowstone was recently the site of other visitors breaking the rules by getting too close to nature, when two tourists nabbed a baby bison and loaded it into their SUV because they thought it looked cold. The bison later had to be put down after the herd rejected it.

See below for photo of one of the men, posted to Twitter: