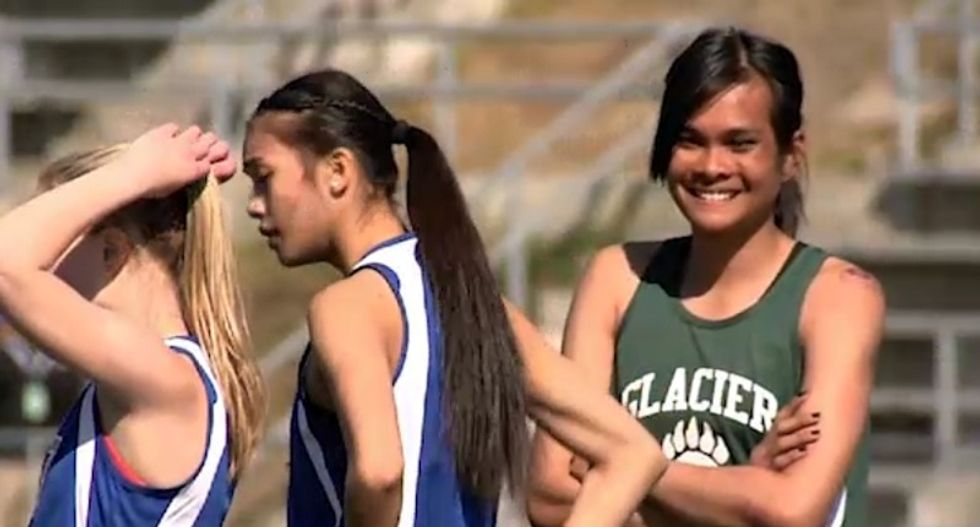 A transgender girl is competing in track sports at her Alaska high school despite attacks from anti-trans activists, KTVA reports.

But Nattaphon Wangyot is not backing down. Though she has declined to speak on the issue, Wangyot is representing Haines High School in weekend meets, including one on Saturday.

Members of the anti-trans group, Alaska Family Action, gathered outside a meet on Friday.

"It is not fair and it is not right for our female athletes," protester Stephanie Leigh Golmon Williams told KTVA. "And we have a responsibility to protect our girls that have worked really hard, that are working toward college scholarships."

“I think that we’re running a track meet and we’ve got another student participating and we’re happy about that," he told KTUU.

Viewers continued the conversation on KTVA's Facebook page, with some agreeing with Strickland that the criticism of Wangyot participating in girls' track was overblown.

"Girls lifts too and some of them are stronger than boys," one woman wrote. "So why does it matter? Let the person be happy especially if she's not affecting anyone's life, she just wants to do what makes her comfortable but then again we live in a world that's never fair and people are always complaining about something."

Another woman noted Wangyot appeared to come in third, being beat by two other girls. Wangyot does not appear any larger, physically, than her competitors.

"Born a male, he is a male and decides to think he is a female to run in woman's standards because running the men's track and field is to hard," one man chimed in.

Trans activist Brynn Tannehill pointed out in the Huffington Post that transgender women do not have an unfair athletic advantage. The NCAA determined:

It is also important to know that any strength and endurance advantages a transgender woman arguably may have as a result of her prior testosterone levels dissipate after about one year of estrogen or testosterone-suppression therapy. According to medical experts on this issue, the assumption that a transgender woman competing on a women’s team would have a competitive advantage outside the range of performance and competitive advantage or disadvantage that already exists among female athletes is not supported by evidence.

KTVA reports that 30 states allow transgender athletes to compete with the gender they identify with.

Watch the report, from KTVA, here:

Andy Biggs is CPAC’s 'piñata' — until he vows investigation into J6 committee: report

GOP Rep. Andy Biggs of Arizona was booed at the CPAC summit in Texas on Friday for not doing more to release Jan. 6 Capitol attackers from jail.

Biggs was on a panel titled the “Rise of the American Gulag” at the Dallas conference.

He announced the appointment during a news conference Friday in West Palm Beach as Francis stood beside him accompanied by her mother, husband, and two small children. Francis would be the only Black person appointed to the court under DeSantis and the second Black woman to serve.