Trevor Noah burns Trump’s America: ‘I’m from a Third World country — but you’re headed to one’ 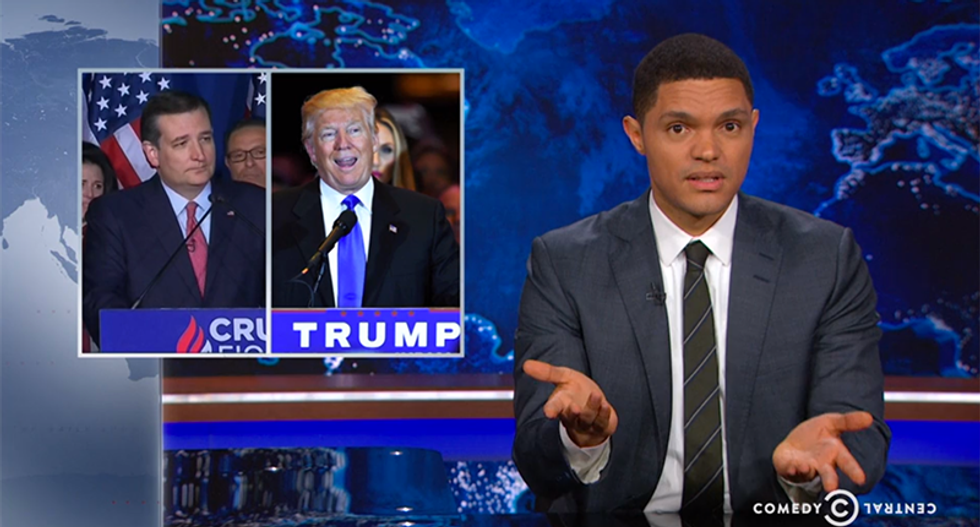 Trump is the nominee and comedians everywhere are both poking fun and asking what happened. Wednesday night, Trevor Noah had a hard time letting the reality fully set in.

“That’s right, people, take a second and breathe that in,” Noah said starting the show. “Because American politics has just entered a whole new world, just like the one Aladdin and Jasmine sang about. Except they can’t come, because they’re Muslim.”

The people in the streets didn't take it well either, Noah explained before showing clips of the film "Jumanji" where elephants were in the streets, crushing cars and people were running for their lives.

Trump won Indiana so big that he humiliated opponent Sen. Ted Cruz (R-TX). Noah explained that it almost made Cruz seem human. “Yay? Is this a yay? I’m so conflicted,” he said. “I mean, Ted Cruz lost, but it’s because Donald Trump won. It’s like finding out your herpes is gone but it’s because your dick fell off."

Noah told his audience to pause and let the reality really sink in. “The last time either major party nominated a total outsider, someone who had never held elected office, was Dwight D. Eisenhower. And that only happened because he beat Hitler. So back then you had to win World War II. Now you just have to win Twitter.”

Noah said he was ready for American politics to be pretty wild when he came to live from South Africa. “But now seeing all of this shit happen, I think I should have asked if you were ready. Yeah, because I’m from a Third World country. It looks like you are headed to one.”

But, according to Noah, this is partly the media's fault. They were the ones who spent the last several months claiming it would never happen. One even said they'd eat their shoelaces or their right hand if Trump won. “Why does everything have to be about eating in this country?” Noah asked. Perhaps, because the GOP just ate their own people.

Steve Bannon demands more 'Judeo-Christian' babies to save civilization: 'We'll train them up'

Conservative podcast host Steve Bannon argued on Monday that the only way to "save civilization" is to birth more "Judeo-Christian" babies.

Bannon made the remarks after Real America's Voice correspondent Ben Harnwell blamed "the fertility crisis" in France on "militant secularization."