Trevor Noah shreds NC’s fight to discriminate: ‘You’re willing to give up $2B over bathrooms?’ 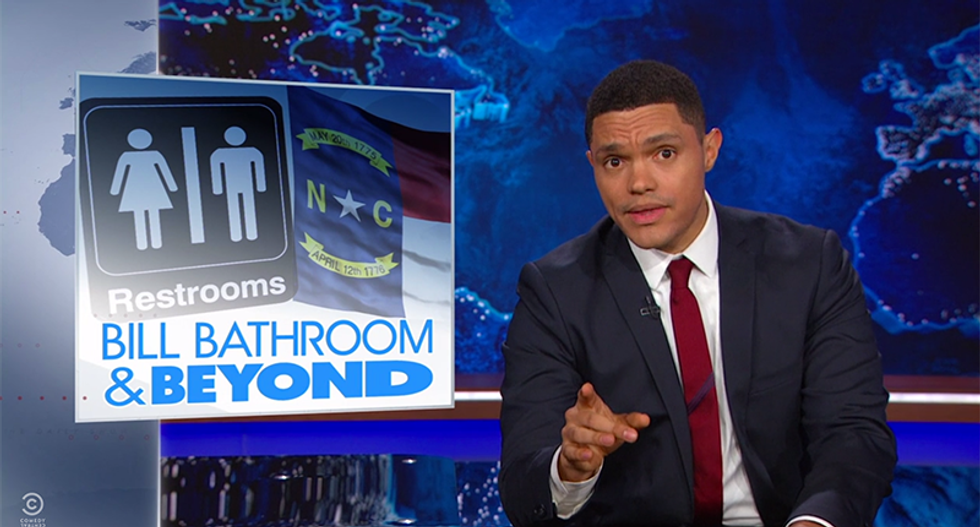 "Two billion dollars?!" Trevor Noah shouted in disbelief over the amount of federal funding the state of North Carolina stands to lose if they move forward with HB2. "These guys are not f*cking serious. You're willing to give up $2 billion over bathrooms? There is no one I would not let use the bathroom for $2 billion. In fact, I would be your bathroom, for $2 billion. No, wait, that came out wrong. I mean, I would literally let you sh*t on me for $2 billion. How is this still a fight?!'

The Department of Justice gave North Carolina until Monday to throw out or change the discriminatory law, but they decided instead to sue the DOJ for overreaching.

"North Carolina, at what point would you admit you're taking this too far? Because, you realize, you've already been sharing the bathroom with trans people for your entire lives and you've never noticed it. And why would you? Because it's a public bathroom! You're supposed to go in there, mind your own business and get out as fast as you can! That's all you do! If you can ID anyone else in the bathroom with you then you were paying too much attention. Elvis could be at the urinal next to me and I wouldn't notice because I'm looking straight ahead at the wall."

Noah says that even if you hate transgender people it's ridiculous to go after bathrooms as if they're some sacred place. There are plenty of other things we should be complaining about when it comes to public bathrooms. "Just for starters, there's pee everywhere. That's a bigger problem. Where is all the pee coming from, people? Why isn't it going in the places it's supposed to go? And how come that automatic toilet flushes before I'm done? What's the rush? You're a toilet! You don't have anywhere to be!" Noah said, emphasizing how many other problems there are.

Gov. Pat McCrory isn't frustrated that the DOJ is enforcing Civil Rights law — so much as he's angry that he only got three days to make it through the legal documents they sent the state. Apparently, they were all too busy in the bathroom to get their work done in the ninth-largest state in the country. McCrory is also strangely proud of being the ninth-largest, he's reminded people of it in every single interview.

Noah might stand beside transgender Americans who want to use the bathroom in peace, but he also says he gets why it's an issue. "As progressive you must acknowledge, how difficult it must be for the whole idea of transgender, you know, it must be so confusing. There seems like there's a lot of change happening very quickly in society. There are some people who are just getting comfortable with Ellen. And now we're telling those same people, 'Hey, by the way, there are men who use to be women and vice versa, or they might be somewhere in between and they're part of society too.' And I can see how it might feel like a lot to handle."

However, Noah explains that these anti-transgender laws simply exploit that fear. "And actually goes far beyond bathrooms. Because this law actually says that gay and transgender people cannot be protected as a class. Which means, it's okay to discriminate against them in any number of situations, including employment, housing and every other situation."

Noah then showed the clip of Attorney General Loretta Lynch laying down the law to North Carolina. "She's right. This is, at its roots, about America's founding ideas. Although, for what it's worth, I'd be pretty surprised if America's founders saw this debate coming," he joked before showing fake founders trying to decide between bathrooms or having sex with their slaves.

Check out the full video here via Comedy Central: