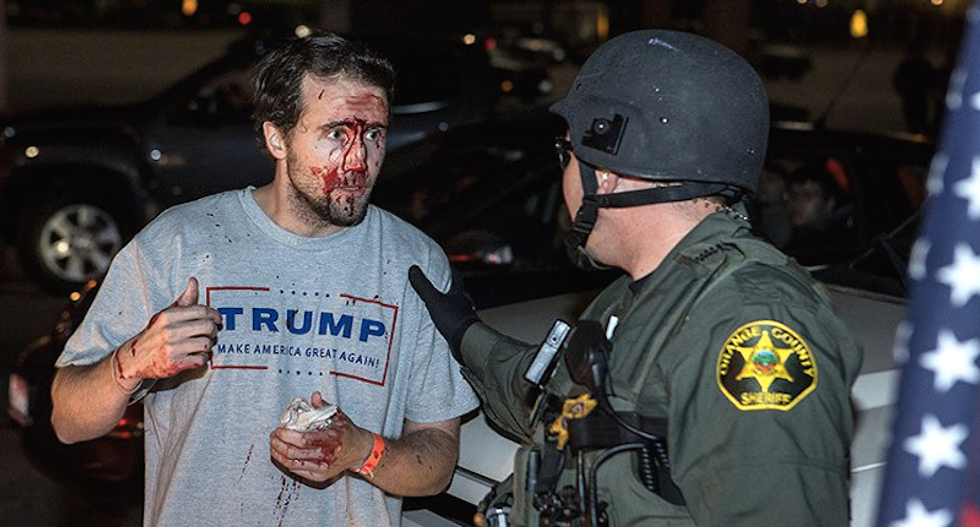 A Donald Trump supporter who gained fame when he was beaten bloody by bystanders has turned out to be a convicted scam artist and outspoken racist.

Cole Bartiromo got a $500 bill autographed by the Republican presidential candidate last week in Costa Mesa, California -- just before he was sucker-punched after trying to grab his Trump hat back from a girl who had snatched it from his head, reported OC Weekly.

The 31-year-old Bartiromo lunged at the girl, the newspaper reported, but another protester struck him without warning in the head -- opening a gash in his forehead that bloodied his face.

“Suddenly, out of nowhere, I felt this thud in the front of my head," Bartiromo said, in one of the numerous interviews he's given since the brawl. "I started panicking, getting scared (and) thinking, ‘When are they going to stop? Are they going to kill me?’ I mean, these aren’t rational people.”

His beating has been widely reported, and some commenters have promoted the story to discredit Trump protesters as violent and unruly mobs.

Bartiromo insists he waded into the crowd only to document the protest, and only became involved in the melee after his "make America great again" hat was snatched from his head.

But that's not what he said before the rally on Facebook: "I'm going to spit on these worthless scumbags & throw money in their faces so they get on their knees & put them to work for their free money for a change & put their protest in disarray."

He frequently posts rants about undocumented workers and has wished all Muslims dead in social media posts, the newspaper reported.

Police arrested 17 people for failure to disperse after the protest turned unruly, and an officer was struck in the head by a rock but escaped injury due to his riot helmet.

Bartiromo was not arrested at the Trump rally -- but he made national headlines 15 years ago, as a high school senior, for running a series of scams and wiping out his parents' financial security and retirement savings.

The Securities and Exchange Commission fingered Bartiromo as the "mastermind" behind a scam that bilked more than 1,000 people through a website that promised risk-free returns on sports betting.

Investigators also said Bartiromo, then 17, accessed his father's online brokerage account and spread false information to drive up stock prices -- which he then cashed in for about $91,000.

He eventually agreed to return the money he made from the stock scam and repay $1.6 million in the sports betting scam. 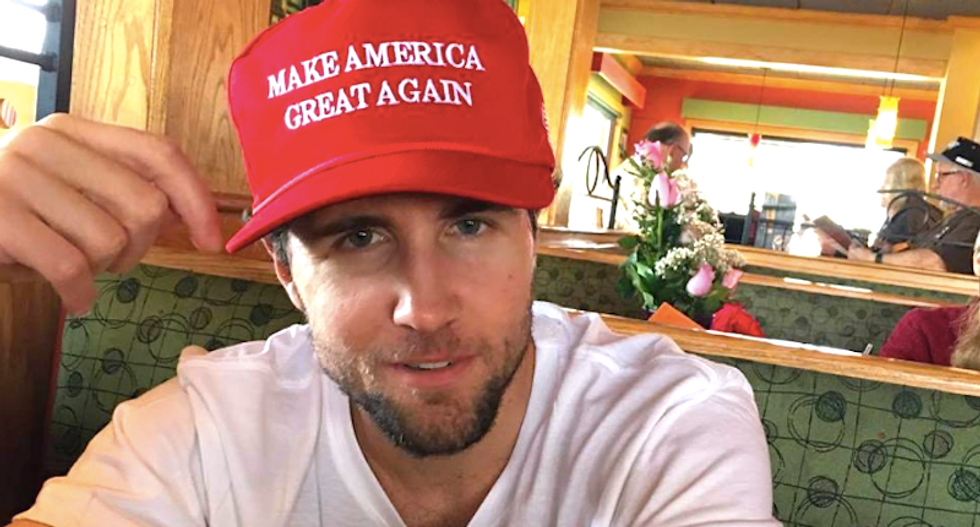 Bartiromo served 33 months in federal prison in connection with 2004 convictions for eBay and bank frauds and then went back to prison just weeks before his probation was set to end for using a cell phone in a halfway house.

Media reports about his beating at a Trump rally have generally described Bartiromo as a "news blogger" -- which is accurate only in the broadest sense that he operates a blog that covers newsworthy topics, mostly through selfie videos.

His Newsball blog reveals the names of underage suspects and victims -- and not always accurately -- and engages in what amounts to social media pranks, such as creating fake social media profiles for notorious killers.

Bartiromo has been described by his critics as "a sociopath in the truest form" and a "god awful monster."

“What I want to know, is why have the authorities not done something to this jerk? I really don’t get it,” said author Daleen Berry, who's written a book about a murder case also covered by Bartiromo. “He’s named people incorrectly. He’s threatened them and gotten them to give him information by blackmailing them. Teenagers have sent me emails saying, ‘Yeah I turned it over to him because he threatened to do things to our family.’”

Bartiromo also operates the "Dollar Scholar" blog, which mixes sports gambling tips with posts revealing the identities of lottery and game show prize winners -- who are then deluged with requests for money, possibly from the blogger himself.

And, according to one blogger, he's still operating fraudulent eBay accounts.

"Daily Show" correspondent Jordan Klepper has released a fresh set of interviews with supporters of former President Donald Trump who attended a rally in Iowa a few weekends ago.

What Klepper found in Iowa is a large contingent of Trump supporters who firmly believe that he won the 2020 election, the fact that he definitively lost.