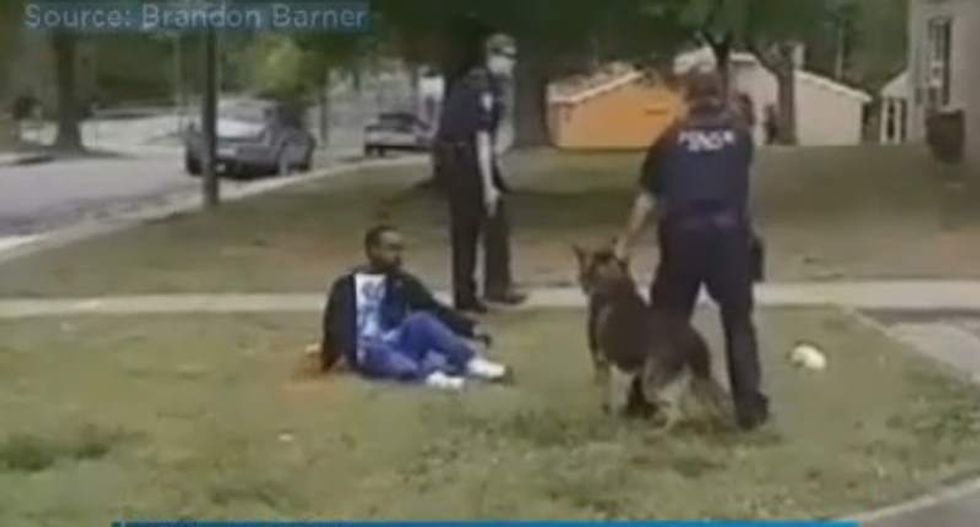 Video captures Rafer Allen (left) on the ground after being attacked by a K-9 officer. (WWBT-TV)

Police in Petersburg, Virginia are investigating an officer's conduct after video captured the aftermath of his K-9 partner's mistaken attack on a local man, WWBT-TV reported.

The video shows Rafer Allen on the ground yelling at the officer to get the dog away during an incident on Saturday. The officer was responding to reports of an altercation and a man possibly carrying a gun. Allen was reportedly part of a group of people who witnessed the fight.

The suspect fled the scene while being questioned by authorities, spurring them to release the K-9. But instead of tailing the suspect, the dog instead attacked Allen.

According to Allen, the officer had to choke the animal in order to stop the attack, and later apologized for the dog's actions.

"Why do you have to do all that if it's your dog and you've had it for decades?" he asked.

Authorities confirmed the attack in a statement, saying that the dog had been taking off of active service pending an investigation. However, a police spokesperson refused to identify the department's protocol regarding releasing the use of police dogs amid a crowd.

Watch WWBT's report, as aired on Monday, below.