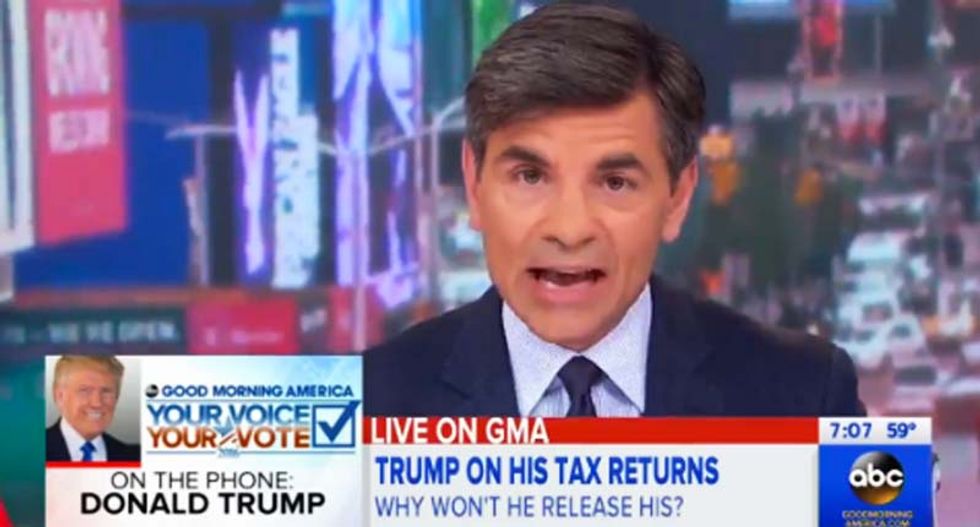 Stephanopoulos' questions were so persistent that Trump finally blurted out, "It's none of your business!" when asked what his tax rate was for the past year.

Allowing Trump to phone in his interview, Stephanopoulos batted away questions about his connections to the Clintons by repeatedly pressing Trump to release his income taxes filings as Trump kept saying it would be difficult because he's being audited.

Stephanopoulos came well prepared to parry Trump's excuses, pointing out that former President Richard Nixon once released his taxes while in the midst of an audit, and that Trump had no problem releasing his personal financial info when he was trying to get a casino license.

"There have been many president who have not shown their tax returns," Trump stated, only to have Stephanopoulos reply, "Every single nominee since 1976 has released his tax returns."

When Trump stated that he had released his "financials," the ABC host countered by saying, "What the financials don't show is your tax rate. They don't show whether you paid a low tax --"

"I try hard to pay as little taxes as possible," Trump interrupted. "I've said that for the last two years."

Pressed further about his tax rate, Trump grew aggravated and bluntly stated, "It’s none of your business!”