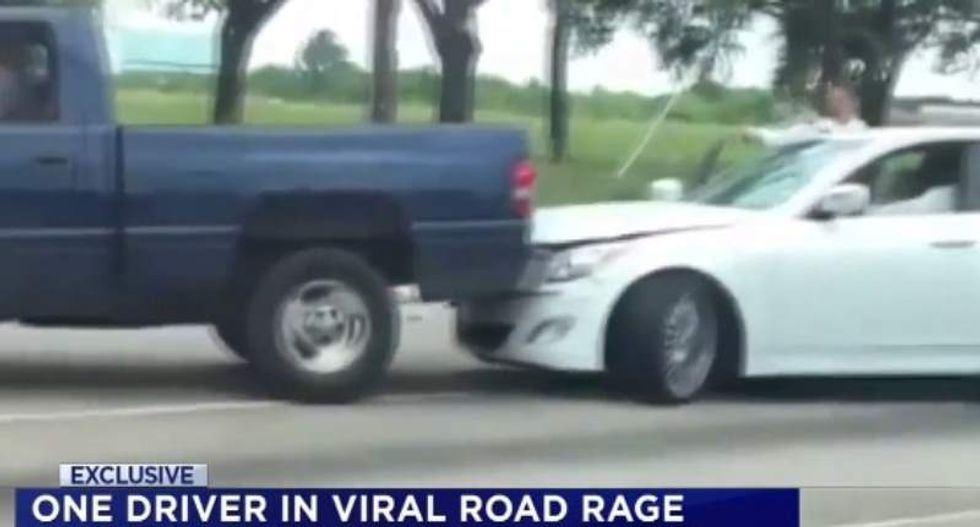 A Texas man and his daughter captured a roadside argument on video that culminated in both a physical attack and an intentional crash, KTRK-TV reported.

"I was thinking this is going to be bad," said the witness, David Dao, whose daughter recorded the incident on her cell phone on Saturday. "At that time, I knew because there's physical damage now."

The incident involved two men in a white car and a man and a woman in a truck at the intersection of Farm to Market Road 1960 (FM 1960) and U.S. Highway 290. The woman is seen arguing with the car's passenger before the drivers intervene. However, when the woman approaches the car again, one of the men throws a drink at her.

That prompts the driver of the truck to get out and kick the car's grill, leading to the other two men getting out of the car and attacking him. The woman is punched in the face when she gets in the middle of the altercation, and she can be seen screaming.

However, after everyone walks back to their respective vehicles, the truck suddenly backs into the car, damaging its front end before speeding away. The car then speeds off in pursuit.

The driver of the car told KTRK that the incident escalated because the man driving the truck cursed at him. He did not identify himself, but said that he filed a police report on Saturday evening.

"It's not worth it," Dao said of what happened. "At the end of the day, how much further are you going to get?"

Watch a report on the incident, as aired on KTRK, below.

The video captured by Dao's daughter can be seen in its entirety here.