WATCH: Anti-LGBT activist squirms when asked on camera what bathroom a trans woman should use 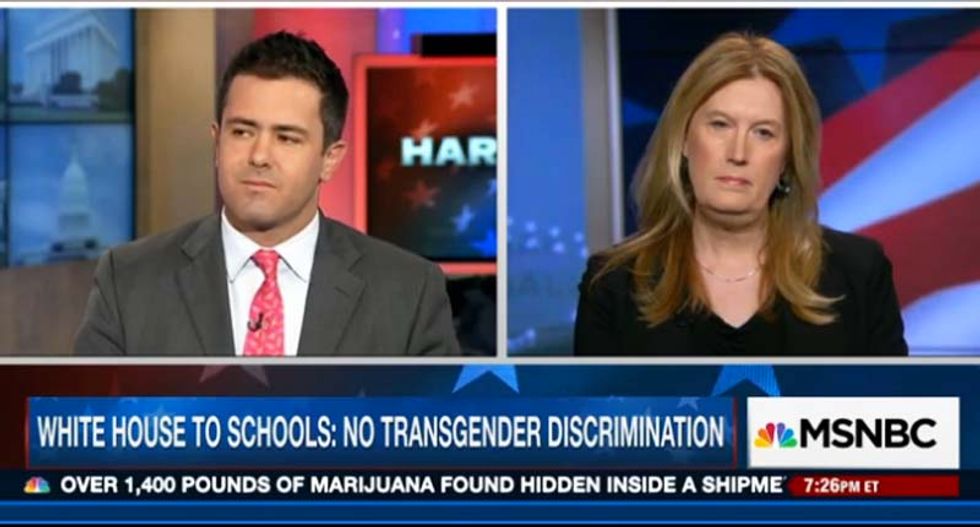 MSNBC host Chris Mathews put a director from the virulently anti-LGBT Family Research Council on the spot by pressing him to tell a transgender woman who was on the panel with him which bathroom she should use.

Travis Weber, who is a director at the Director of the Center for Religious Liberty at Family Research Council, was completely flummoxed and tap danced around the question of which bathroom he would suggest for trans activist Jennifer Finney Boyland.

Boyland got the conversation started by pointing out that push back on bathroom rights for trans community is a direct result of conservatives trying to make up lost ground after losing the same sex marriage war.

"I don't think this is about bathrooms at all. I think it's about equal rights. Transgender people don't want special rights. We want equal protection under the law, and mostly what we want is to be left alone. And if we can’t be left alone, we'd like to be treated with love," she stated. "So you don’t want me in the men’s room. And you know how you create that perfect situation? Just stop. Stop coming up with these laws. Stop causing trouble where there is no trouble."

"Maybe because now gay men and lesbians can get married, and they’re no longer the whipping boys and whipping girls in this country, now maybe they’re trying to rile up people against transgender people," she continued. "And it’s not right, and it’s not fair."

Matthews jumped in to put Weber on the spot.

"Travis, tell Jenny what bathroom she should use, " Matthews said.

"Which one should she use?" the Hardball host pressed.

"Yeah, I mean I’m not sure, um —," Weber attempted before Matthews badgered him, asking: "Well just answer that question."

After Weber stumbled once more, saying,  "I think people should be —" Mathews went in for the kill.

"I think we can do things the way we’ve done them for decades, and people could use bathrooms according to biological sex with specific accommodation made for people who have a genuine issue," Weber replied. "If we look at the North Carolina law, it made an accommodation. People are not happy with that, however. And now the Obama administration —"

"Let’s just talk about transgender people," Matthews said, cutting him off once again. "What should a transgender person who identifies as a woman do? What bathroom should they go to? Just keep it simple."

"See, no, you can’t answer the question, can you?" said Matthews.