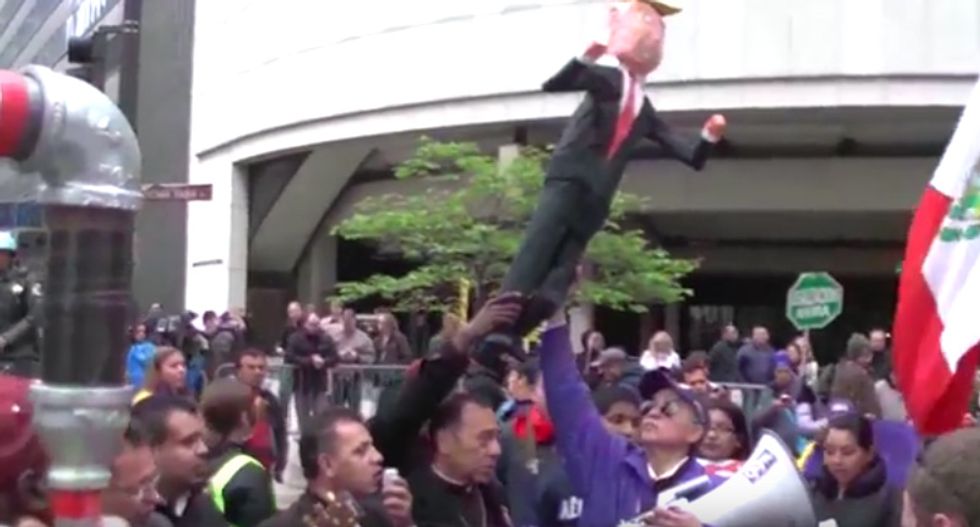 Chicago priests prayed for Donald Trump's soul and exorcised his effigy during Sunday's May Day demonstrations. The video, which is in Spanish, appeared today after reports on the exorcism were tweeted out from @Aaroncynic's account.

The march began at Chicago's Union Park and proceeded to Trump Tower, May 1st, which is not only International Workers' Day, but is also commemorated in Chicago as the anniversary of the Haymarket Affair, where a rally for workers' rights turned deadly, resulting in the death of eight people. Labor union members were charged in the affair, with eight of them convicted, and four later hanged. Their convictions were considered to be politically motivated, and the four who died are often referred to as "martyrs."

During this May Day celebration, the priests identified Trump as the current threat to workers' rights.

"We ask that you bring out the demons and demonic forces of our brother, Donald Trump,” spoke the lead priest. “We ask, oh gracious God, to take away the hatred, bigotry and racism and the forked speaking tongue that he’s had and replace it with a powerful tongue and care," the Chicagoist reported.

In the video, published by John Sheehan, the priests first sing "We Shall Not Be Moved," in Spanish, before one of the priests takes out holy oil and holy water with which to perform the exorcism. As the priest speaks the words, the video pans out to the multi-racial crowd, many of whom were dressed in bright feathered headdresses, along with those in traditional costumes from several Latin countries.

The most chilling view is at 3:22 of the video, when Chicago police officers, some of them on horseback, are seen filming the crowd. It is not clear whether the police are taping the exorcism, or whether they are documenting the faces of those who were there at the rally.