WATCH: Cops hold man down and sic K-9 on him after beating him -- for dancing in a parking lot 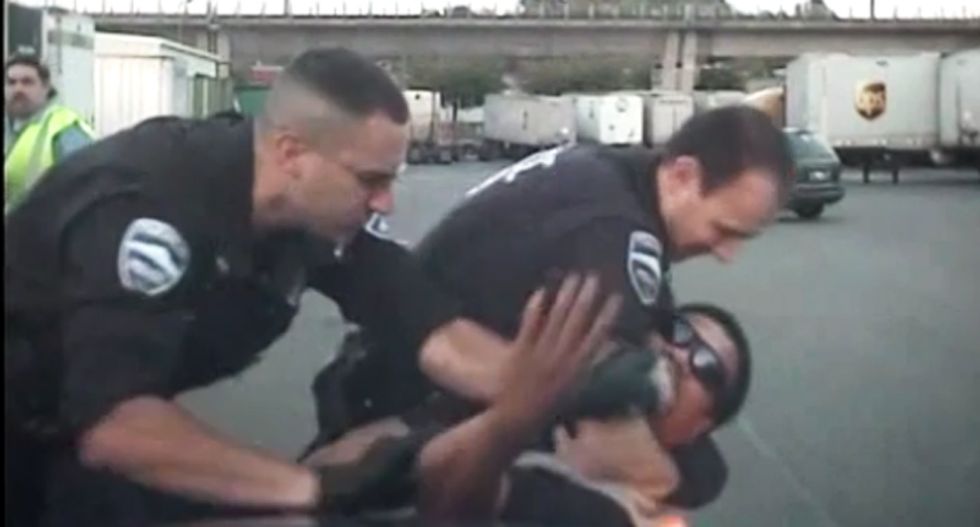 Linson Tara being held down by Washington cops -- Screen grab

A Washington man has settled a lawsuit with the city of Tukwila after police officers assaulted him following a complaint that he was dancing in an industrial parking lot, reports the Seattle Times.

The city will pay Linson Tara $100,000 to settle a civil-rights lawsuit filed after the officers used Tasers, their fists and then a police dog on him while he was being restrained.

Tara was facing three counts of fourth-degree assault on police officers, but those charges were dropped when dash cam video showed one of the officers holding Tara on the hood of the police cruiser while his partner used a Taser on him.

Tara can then be seen being thrown to the ground with the two cops piled on him as one punched him repeatedly while the other held him down.

During the entire altercation a police dog is heard frantically barking and appears on screen after being released from the cruiser where it proceeds to attack Tara as he is restrained.

One officer can be heard telling Tara, "Put your hands behind your back and I'll take the dog off."

Tara was later transported to a local hospital treated for injuries that included dog bites.

In  the police report, officers Brent Frank and Mike Boehmer stated that they had been called to the parking lot after receiving a report that Tara was "walking around, yelling and dancing.”

According to the lawsuit, the officers used excessive force, noting that by the time Tara was rolled over he appeared to be unconscious.

The lawsuit also challenged the the city’s policy of allowing police dogs to bite suspects as a “pain compliance” technique.

The department previously found the officers’ use of force, including the deployment of the K-9, to be within their guidelines.