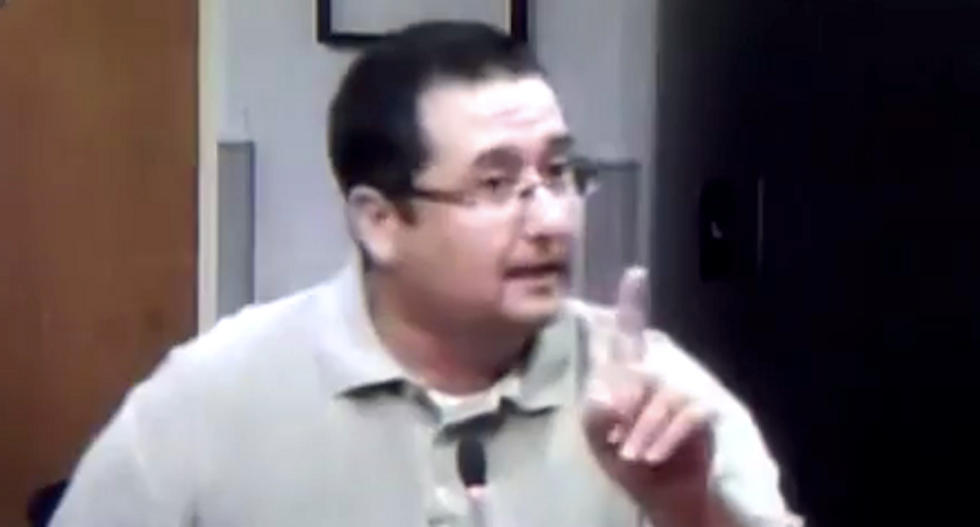 A Florida parent was arrested Tuesday night after steering a school board meeting off the rails during a discussion of a restroom policy for transgender students.

Dean Paterakis, who's running for Brevard County School Board, was carried out of the meeting by four deputies after saying the words "erect penis" after officials opened the discussion up to the public, reported Florida Today.

The school board chairman warned attendees not to engage in "profane, abusive or slanderous speech" before turning the microphone over to the public, but the official said Paterakis quickly violated the first rule.

"The reason why I am here now is that we are not putting children's safety first," Paterakis said. "When you say what we need to use language that is appropriate in what we do in our schools (and) should be what we have here. Would it be okay now if I showed a picture of my penis to you guys? Because that's what happened."

"We have a teacher who put his phone onto the big screen and showed, what the students say, was his erect penis," Paterakis continued.

He was referring to a 2014 incident in which a teacher was suspended 10 days after briefly showing a photo of his penis in class after scrolling through photos on his phone, which was projected onto an overhead screen.

Paterakis protested, and a security officer approached the podium, pushed down the microphone and grabbed the candidate's shoulder and pushed him away.

Ziegler said he'd ignored warnings to be civil as two Brevard County Sheriff's deputies approached Paterakis, and some of the crowd began chanting, "Let him speak."

Paterakis dropped to the floor and crossed his arms and legs, and four more deputies came into the room to carry the candidate out.

"I think it was a fair request to ask him to be civil," Ziegler told the crowd, which was loudly chanting. "We will not allow slanderous, abusive, or profane speech in the meeting."

Paterakis was arrested and charged with disrupting a school function and resisting arrest, and he was released from jail about 3 a.m. Wednesday on $750 bond.

That's not the first time he's been kicked out of a school board meeting.

Paterakis said in a Facebook post after his arrest that he'd been thrown out of a meeting a few years ago for protesting the Common Core curriculum, and someone had taught him to squat on the floor to prevent his removal.

"Pedophiles are in our schools and only a few citizens are doing anything about it," Paterakis wrote. "I was hoping to inform the majority of citizens that do not know. But unfortunately the BCSO and BPS are proving to be the protectors of these pedophiles when they create trumped up charges to silence me from exposing what sick things are going on in our schools!"

Paterakis closed his post with a quote that he inaccurately attributed to Buddha: "There are three things that cannot long be hidden, the sun, the moon, and the truth."

David Hogg, a survivor of the 2018 mass shooting at the Marjory Stoneman Douglas High School, told CNN's Alisyn Camerota that he felt threatened when QAnon-loving Rep. Marjorie Taylor Greene (R-GA) followed him down the street and told him she carried a gun with her.

After playing a clip of Greene harassing Hogg, Camerota noted that Greene told Hogg that she had a concealed carry permit and carried a gun with her.

A Louisiana family says they were turned away from a "whites-only" cemetery.

Before he died this month, Allen Parish Sheriff's Deputy Darrell Semien told his family he wanted to be buried at Oaklin Springs Cemetery in Oberlin because it was close to home, but his family said the cemetery refused to carry out his final wishes, reported KPLC-TV.

A German neo-Nazi was sentenced on Thursday to life in prison for murdering pro-migration politician Walter Luebcke, a killing that shocked the country and highlighted the growing threat of right-wing extremism.

Stephan Ernst, 47, was found guilty of shooting dead the lawmaker from Angela Merkel's conservative CDU party on June 1, 2019, in what is believed to be Germany's first far-right political assassination since World War II.