WATCH: Fox News pundits freak out over Facebook news 'slant' without a shred of self awareness 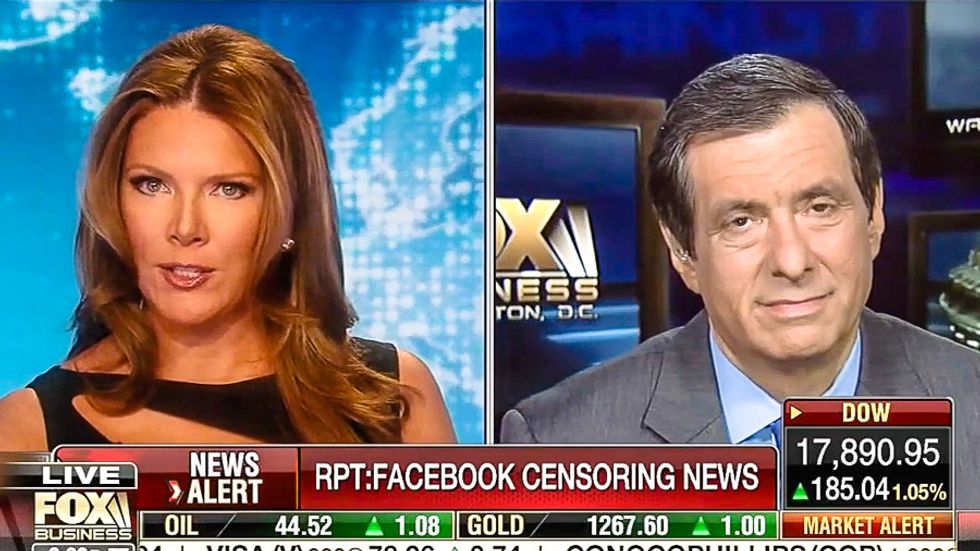 Pundits at Fox News lambasted Facebook on Tuesday over reports that it filtered out fringe conservative sites and news aggregators in favor of mainstream sources.

After a former contractor accused Facebook of having a liberal bias, Commerce Committee Chair Sen. John Thune (R-SD) revealed on Tuesday that he had launched a probe of the social media company.

At Fox News -- a network that is often mocked because it's conservative bias does not sync up with its "fair and balanced" motto -- pundits expressed outrage that a private company like Facebook would "slant" its content.

Harris Faulkner, host of Fox's Outnumbered, worried on Tuesday that Facebook might be trying to influence the outcome of the presidential election.

"That's really the problem," she opined. "It's what they choose to make trending, to make important, to slant. It's one thing to quiet a source and to censor it, but then to draw attention to something else to make you think that's the most important -- be it the liberal point of view or whatever -- that's really an egregiousness."

"If they have a department that's in charge of this, they might want to clean house," Faulkner recommended. "We all have a bias, we're human. What we're asked to do as journalists and what we're asked to do as ethics keepers in different positions is to be able to put that bias aside and make a decision, not about who is right, but about what is right to get to the truth. That's what our job is."

According to Fox News media critic Howard Kurtz, the allegations "strike at the heart of the credibility of Facebook as a neutral platform."

Kurtz argued, however, that Facebook executives should think twice before participating in Sen. Thune's Senate probe.

"In this case, Facebook is kind of functioning as a newsroom," he explained to Fox Business host Trish Regan. "It's employing journalists. Biased as it might be, if Thune had sent a letter like that to the New York Times or Washington Post or Fox News, we'd probably tell them to buzz off."

"Because we have that ability to select what we want to put out as programming," Regan disagreed. "It's kind of like faulty marketing if you think about it, Howie. It's not right to say you're doing one thing and then do another."

"It's a little bit of false advertising," Kurtz conceded. "This is actually a real crisis, but should the government be involved in investigating this? That's the question."

Watch the clips from Fox News and Fox Business below.