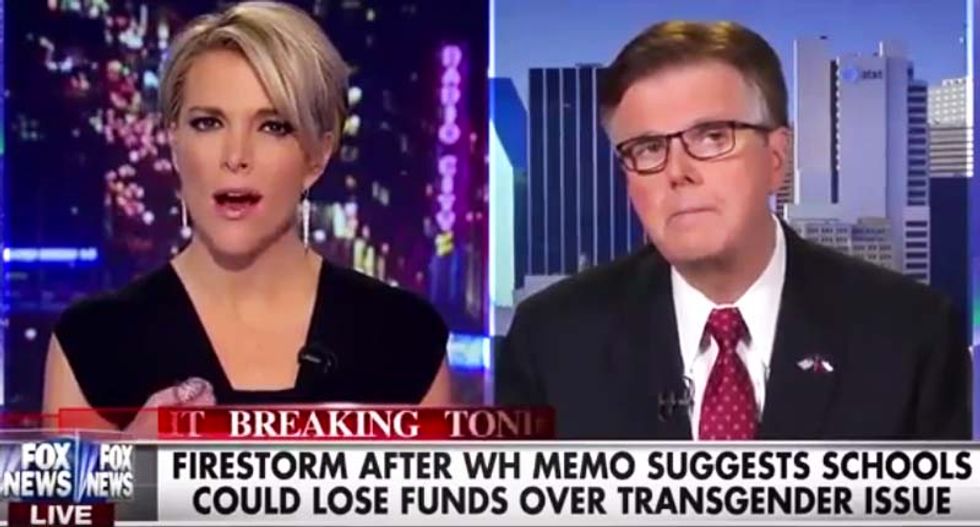 On Friday night's Kelly Files, host Megyn Kelly let Texas Lt. Gov. Dan Patrick get his say on his opposition President Obama's order to public schools that they must respect trans students’ right to use the bathroom. Then she shut him down hard -- including cutting him off at the end of the segment.

As the skeptical Fox host looked on, Patrick rambled that allowing the change in bathroom policies could lead to the end of public education, with more parents pulling their kids out of school.

When Patrick reached the point of talking about men dressing up as women to assault little girls in the bathroom, Kelly had clearly had enough.

"A lot of sex offenders are men who molest men, little boys," She pointed out."Why do they need to sneak into the girls room?"

Patrick immediately changed the subject, citing his 8-year-old granddaughter and how he doesn't want a man sharing a bathroom with her, only to have Kelly cut him off again.

"But what if a man looks like a woman and she would never notice him?" she asked.

“Megyn, you’re missing the–,” Patrick parried only to have Kelly shut him down with, "No, I don’t think I’m missing anything.”

Watch the video below uploaded to YouTube and via Mediaite: