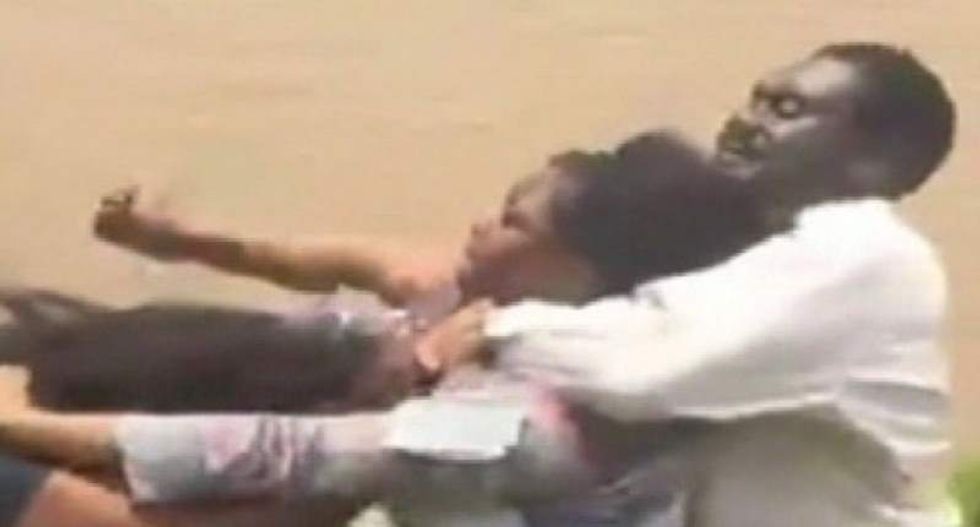 Kingstree High School assistant principal Henry Burgess is seen choking a female student out during a fight on May 3, 2016. (WCSC-TV)

A school official in Kingstree, South Carolina is under investigation -- and was almost arrested -- after he was caught on video choking a female student to the point of unconsciousness, WCSC-TV reported.

The footage shows 69-year-old Mack Henry Burgess grabbing the girl from behind on May 3 to break up a fight involving another student at Kingstree Senior High School. The girl can be seen swinging at first, then reaching for her neck before eventually going limp, at which point a witness can be heard shouting, "She out, she out."

"My daughter was in a choke hold to the point where her feet were off the ground and she was reaching for her neck for them to turn her loose," said the girl's mother, Yolanda Nesmith.

Police determined there was probable cause to arrest Burgess, an assistant principal at the school, after Nesmith provided them with the video. However, a magistrate judge in Williamsburg County decided to instead issue a courtesy summons for a hearing involving everyone involved in the incident.

Nesmith told the Kingstree News that while she did not condone her daughter fighting, she did not object to her defending herself when given no other options. She also said that the incident represents something that goes beyond Burgess' treatment of her daughter in particular.

"When this has happened to other kids in Williamsburg County at this school and other schools, what they do, they sweep all this stuff under the rug and its never let known," she said. "This is just a fight for the kids and for other parents who don't go through these things. I'm going through with this because this is my child. Anything could have happened to her. She could have died from this."

Watch WCSC's report, as aired on Wednesday, below.