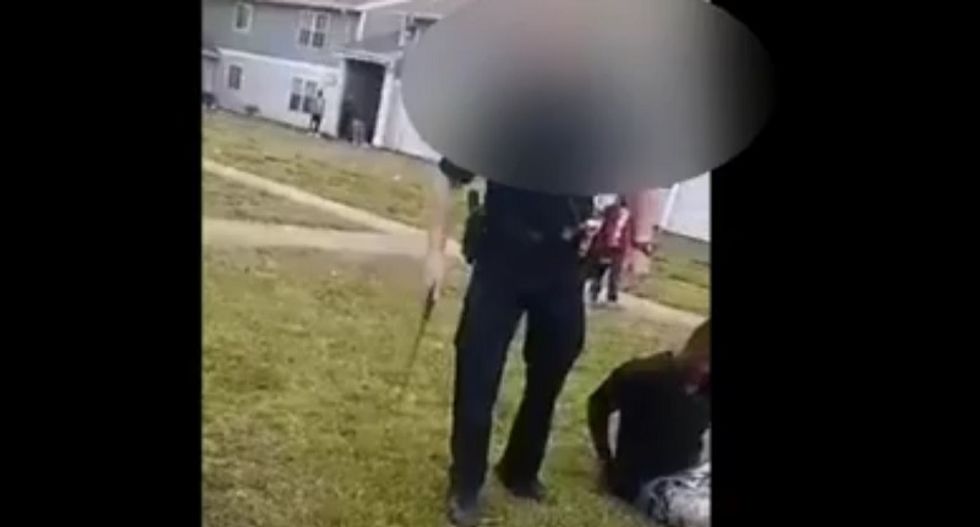 Witnesses are accusing Portsmouth, Virginian police of beating a handcuffed man and deleting the evidence, WAVY reports. Cell phone video that survived shows the officers threatening to "evict" outraged witnesses if they didn't go back inside their apartments.

The video was recorded on Saturday at the London Oaks Apartment Complex, WAVY reports. It shows an African-American man on the ground, handcuffed. Witnesses are surrounding the officers and the man, and expressing anger that he was beaten by the cops while restrained.

Tiara Bailey told WAVY she recorded two videos -- one of officers beating the man, and one of the aftermath. She said after she stopped recording, an officer called her over to a patrol car and asked for her phone. When he handed it back to her, the video of the alleged beating had been deleted.

“After he got my phone and got it back from me, he just let me go,” Bailey told WISHTV. When I looked at my phone he had deleted the video.”

What remained on her phone was still troubling. One officer is seen pointing his baton at a woman filming and threatening to evict her for not leaving the scene.

"We live out here," she replied.

"Ok, I’ll get your address and get you evicted.” he told her.

The other officer threatens bystanders by saying they are an unlawful assembly.

Portsmouth police wouldn't name the officers because they are investigating the incident. Likewise, WAVY blurred their faces. Both named the man in handcuffs, and Portsmouth Police chief Tonya Chapman said he was charged with assaulting police, attempting to take an officer's gun, giving false information to an officer, obstruction of justice, resisting arrest and trespassing.

“They just cursed us out like we were dogs,” Bailey told WAVY.

“This was a situation where people were exercising their First Amendment rights," he told WAVY. "Clearly they weren’t impeding any law enforcement procedures at all, and they fell victim to an aggressive style of law enforcement. That was totally an abuse of power."

Chapman told WAVY both officers are still on field duty and were wearing body cameras at the time of the incident.

Watch the video of the incident, as posted by WAVY, here: